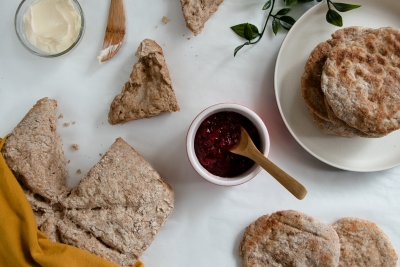 What you need to make this recipe:

How to make Pan-Fried Luskinikn:

Most Indigenous groups on Turtle Island (North America) make some version of a simple bread made with a few ingredients. In Mi’kmaw, we call it “Luskinikn”. It is also commonly called “luski”, “bannock”, “4-cents”, or “fry bread” when fried.  This bread represents a food that was very low cost and affordable for Mi’kmaq, making it a staple when other foods could not be accessed. In fact, this is where the name “4-cents” comes from, as it once only cost 4 cents to make. The bread can be cooked over a fire, in an oven, or fried in oil. It can be eaten on its own, or with different toppings like jam or butter.

While Mi’kmaq did not make the same version of Luskinikin pre-contact, they did make something similar using roots. The root or “bulb” of some native plant species would have been used to create a dough that was flattened and dried.

Pan-Fried Luskinikn is best eaten fresh. Leftovers can be stored in an airtight container in the fridge for 1 to 2 days. 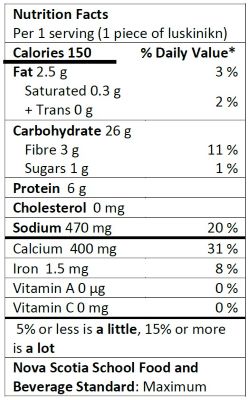 Print recipe with no photo

Breakfast and Beyond Program Home