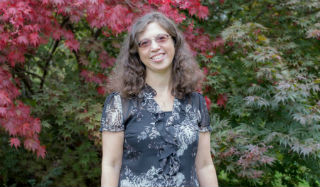 Adriana Benzaquén grew up in Buenos Aires, Argentina, and lived in Toronto, New York and Vancouver before coming to the Mount in 2001. She received her Ph.D. from York University (Toronto) in 1999 and her doctoral dissertation won awards from the Northeastern Association of Graduate Schools and the York University Faculty of Graduate Studies.

Dr. Benzaquén teaches early modern European history, intellectual and cultural history, the history of childhood, and the history of women. She regularly offers these courses:

Dr. Benzaquén is currently working on two interrelated books projects. The first one, “Locke’s Children: Children and Adults in England, 1660-1720,” is a study of the children in John Locke’s extensive circle of friends and acquaintances, in particular the Somerset politician and landowner Edward Clarke and his wife Mary. The correspondence of Locke and his friends offers a wealth of information about children’s lives and their relationships with their parents, siblings, servants, relatives, teachers and friends. In-depth analysis of this correspondence makes it possible to distinguish elements that were common to many childhoods in this period from those that varied, even within a single family, based on gender, birth order, ability and personality. The book will consider the extent to which Locke’s views on children and his advice concerning education were based on his own experiences with and observations of children; the social and interpersonal dynamics between Locke as “expert” and the parents, tutors and children who solicited, were expected to apply, or were the recipients of, expert advice, and the unprecedented pressure exerted on children as a result of new educational theories and standards and a new social and economic environment (rising educational expectations, professionalization).

The second book will be a study of family relationships, friendship and gender, focusing on Mary Clarke and her family. Mary Clarke’s life was both typical and extraordinary. Born to a wealthy family, and having lost her parents at a very young age, Mary’s adult experiences were those of most women of her class: marriage, motherhood, the births and deaths of children, the management of her household, illness, concern about the surviving children’s future. Mary was not intellectually gifted like the other female correspondents of Locke’s who have attracted scholarly attention (such as Damaris Masham and Catherine Trotter), but her letters, written in a distinctive, strong voice, offer us a unique window into the life of an ordinary woman of her class and her time. The book will show how, in fact, it was through (and in) her letters that Mary was able to face the challenges of her life, to reflect on her experiences, and to define and redefine her identity as a woman, wife, mother, mistress of the household, and friend.

Together, the books will shed light on the intersection between a famous figure and the ordinary people whose lives were entangled with his and between early modern constructions of childhood and gender and the everyday experiences of children, women and men.

“‘Pray lett none see this impertinent Epistle’: Children’s Letters and Children in Letters at the Turn of the Eighteenth Century.” In Literary Cultures and Eighteenth-Century Childhoods. Ed. Andrew O’Malley. Palgrave Macmillan, 2018, 75-96.

“Educational Designs: The Education and Training of Younger Sons at the Turn of the Eighteenth Century.” Journal of Family History 40, no. 4 (Fall 2015): 462-84.

“‘No greater Pleasure in this Life’: The Friendship of John Locke and Edward Clarke.” In Friendship and Sociability in Premodern Europe: Contexts, Concepts and Expressions. Ed. Amyrose McCue Gill and Sarah Rolfe Prodan. Toronto: Centre for Reformation and Renaissance Studies, University of Toronto, 2014, 43-70.

For more information on this book, click here. For a review of Encounters with Wild Children in Journal of the History of Behavioral Sciences 43, no. 4 (Fall 2007), click here.For a review in History Workshop Journal 65, no. 1 (Spring 2008), click here.

Listen to the BBC Radio 4 documentary “Case Study: The Wild Boy of Aveyron,” where Dr. Benzaquén and other scholars discuss the case of Victor of Aveyron.