Two pages from an edition of Coleridge’s The Rime of the Ancient Mariner illustrated and signed by Willy Pogany and limited to 25 copies:

One of approximately 10,000 monographs of largely 18th to 20th century British literary works in the Library’s oldest and most important special collection. Named for its donor William MacDonald (1877 -1959) of Sydney, Nova Scotia, the collection is rich with books from small presses, limited editions, illustrated books, including over 60 volumes decorated with fore-edge paintings, and fine bindings.

Example of cover art used for this genreThe Library has a large collection of lesbian pulp fiction, a genre which flourished during the pre-Stonewall era of 1950s and 1960s America when the public’s fascination with the sexual and societal outlaw in books and movies contended with rigorous legal and political sanctions and the celebration of conformity in magazines and on television. The vivid (and prurient) cover art attracted seekers of affirmation (and titillation). 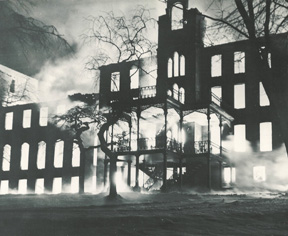 During the night of January 31, 1951 a fire destroyed the entire physical plant of Mount Saint Vincent College, founded as a women’s academy by the Sisters of Charity in 1873.

The archival collection of photos, printed documents and artifacts records the dramatic recovery of “The Mount” to its present status as a co-educational University with a special commitment to the higher education of women and to new modes of distributed teaching and learning.

The Gerritsen and History of Women Collections (Microfilm) 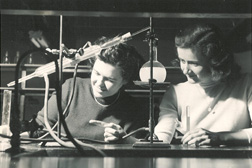 Dr. Aletta Jacobs (1854-1929), the Netherlands’ first woman doctor, is exemplary. Her interests are reflected in the collection of books, periodicals and pamphlets on and by women in many languages which now constitute the core of the Gerritsen Collection of 4,576 titles on microfiche and microfilm. This important resource is complemented by The History of Women Collection which provides microform copies of over 10,000 publications from important U.S. research collections. Both printed catalogues and the Novanet Catalogue provide access to the collections.

ERIC stands for Educational Resources Information Center established by the U.S. Department of Education to collect, index and abstract various types of material of interest to teachers and researchers in education : research reports, issues papers, instructional materials, and tests and evaluation instruments. Our microfiche collection reproduces all Education reports issued by ERIC back to 1966. Most ERIC reports are now web accessible. 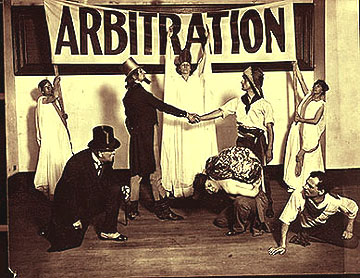 Women’s Peace Party (NY branch), 1916. Photo included with the permission of Swarthmore CollegeWomen’s Peace Party (New York Branch):Scene from “War against War” Exhibition, 1916.Photo and caption included with the permission of the Swarthmore College LibraryThe Woman’s Peace Party was founded in 1915 . In 1919 it became the United States section of the Women’s International League for Peace and Freedom (WILPF). The Library’s extensive holdings constitute a rich collection of primary source material for women’s commitment to both international and U.S. peace movements from 1914 to 1978. Reports, pamphlets and serials published by the Archives of the Campaign for Nuclear Disarmament extend the narrative of the peace movement to 1985.

Emily Greene Balch Papers- Balch (1867-1961) won the Nobel Peace Prize in 1946 for her work with international peace organizations from 1915 and with the WILPF from 1919. She taught economics and sociology at Wellesley College from 1896 to 1918 when her contract was terminated as a direct consequence of her peace work.

Elizabeth Glendower Evans Papers- Evans (1856-1937) was a leading pacifist, civil libertarian, trade unionist, suffragist, and prison reformer. Her commitment to social justice included her support for the cause celebre of Sacco and Vanzetti, two Italian anarchists wrongly accused of robbery and murder. 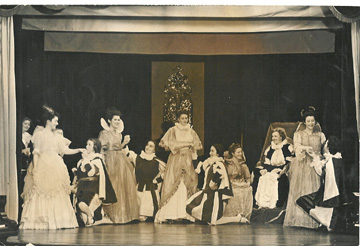 Mount Saint Vincent College students performing a Mother General’s Feast Day play to honour the Mother General’s patron saint. In this photograph from the MSVU Archives the play depicts a scene from the life of St. Aloysius Gonzaga during the term of Mother General Mary Louise Meahan (1926-1944).

Theatrical performance and play writing have a long tradition at the Mount from the time of the Academy to the present. It is only fitting that the Library is the repository for 781 plays microfilmed expressly for the MSVU Library from originals deposited in the U.S. Copyright Office from 1900 to 1945. 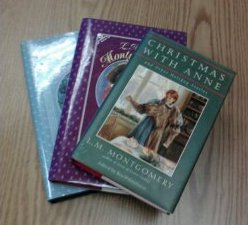 The Canadian Children’s Book Centre (CCBC) is a national, not-for-profit organization, founded in 1976. The Centre is dedicated to encouraging, promoting and supporting the reading, writing, illustrating and publishing of Canadian books for young readers. Its library collection includes every Canadian children’s book published since 1976, including children’s and young adult picture books, fiction, non-fiction and multimedia.

The CCBC maintains mirror collections of Canadian children’s books in each region of the country, and the MSVU Library is the Atlantic regional deposit for this collection. There are well over 6,000 books in the collection from Canadian publishers (with our collection dating from the early 1990’s).

The books are shelved on the Lower Level of the library, arranged in alphabetical order by author. You can access the titles in the CCBC Collection by searching the Novanet catalogue.

More information can be found at the CCBC website.