1. Effects of Cannabis on Brain Function

Over the past decade, our understanding of how cannabis affects brain function through its interaction with the cannabinoid system has significantly advanced. Many neurobehavioural processes are negatively affected by cannabis use, often due to structural and functional alterations of frontolimbic circuitry. With electroencephalography (EEG) and event related potential (ERP) research, deficits in sensory gating, auditory change detection, and cortical inhibition have been reported in cannabis users. However, there are substantial gaps in our understanding of this interaction, including sex by cannabis interactions on brain structure and function. Given what we know about age of initiation of cannabis use and adolescent neurodevelopment, this is a crucial question. Additionally, understanding sex by cannabis effects on the brain during adolescence and young adulthood in an otherwise healthy population is critical for further biomedical research in disease states (e.g. psychiatric and neurological illnesses). In knowing cannabis and sex influences, more refined exploration of illness effects is possible for illnesses that have age of onsets in young adulthood (i.e., schizophrenia).

This current project addresses this neurobiological research and societal need by evaluating brain function in males and females with and without a cannabis-use history. In light of the literature, it seems likely that cannabis use will differentially affect the brains of males and females. While there is accumulating evidence that there are important sex differences on the effects of cannabis on neuropsychological function, the majority of these studies only use behavioural measures, which can be confounded by cannabis’ psychomotor effects. In order to truly elucidate the effects of cannabis on brain function, and any sex differences that may exist, we need to parse apart neural activity from motor response.

Identifying objective, biological markers of psychosis and psychosis risk is critical to understanding the pathology of schizophrenia. As such, this project is evaluating whether the auditory mismatch negativity (MMN) is reduced in clinical high-risk and genetic high-risk individuals.

3. Caffeine and the Menstrual Cycle

The purpose of this project is to examine how caffeine affects brain activity and, therefore, behavior across the course of the menstrual cycle. We do not know how caffeine affects the brain at different points of the menstrual cycle is because, in drug studies, women have historically been ignored as participants. This is true of studies looking at recreational drugs, studies looking at medical drugs (such as those to treat HIV or cancer), and studies looking at common drugs like caffeine and nicotine. One major reason why women have been excluded from this type of research is because of the possibility (if not likelihood) that the effects of the drug will change depending on the menstrual cycle phase, and it is time-consuming and expensive to test women across these different phases. As such, many of these studies have only tested and reported the effects of drugs on men. This is problematic because the results are often generalized to humans as a whole, despite the fact that we often only have data on men, or when we do have data on women either menstrual phase isn’t accounted for or only one phase is tested. This is certainly true of caffeine; not only is there very little research looking at how caffeine affects the brain, but there is also virtually no research examining how these effects change in women across their cycle. Therefore, one major goal of this project is to fill this gap in the literature. Beyond this, we hope this will be the beginning of a program of research in our lab to document the effects of psychoactive substances across the menstrual cycle to make it easier for women to be included in future studies.

This project is being conducted in women who are ‘naturally-cycling’, which is to say their menstrual cycle is not affected by hormones from medications, in the menstrual, follicular, and luteal phases of their cycle. However, given the popularity of hormone-based birth control (such as the birth control pill), we are also performing these tests in women currently using a hormonal birth control method. 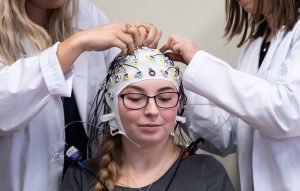 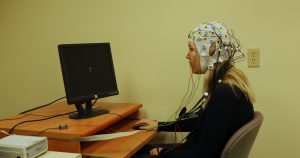 1. The Effects of Racial Stress on Cognition

In contrast to traditional trauma, racial trauma is defined as a form of race-based stress that can be triggered by real or perceived discriminatory racial encounters. Because impairments to executive functions (EFs) have been consistently associated with traditional stress, this study seeks to investigate its relationship with racial stress. EFs are a group of cognitive processes that allow individuals to monitor, control and direct behaviours (e.g. inhibiting a motor response, paying attention, using working memory, engaging in mental shifting, reasoning, planning, etc.). Traditional stress has been associated with disruption of brain functions in the medial prefrontal cortex region, especially those generated by the anterior cingulate cortex (ACC). To investigate the relationship between racial stress and EFs,  we record participants’ electroencephalogram (EEG) activity.

In this two-part study, we are inviting BIPOC individuals to complete a series of online questionnaires and to subsequently come in to MSVU for a three-hour EEG data collection session. Participants will be compensated for their time, travel expenses, and dependent on hair-type, expenses associated with having their hair cornrowed prior to the EEG session.

The research will add to societal understandings of the unique experiences of BIPOC, and thereby magnify BIPOC voices. The Canadian literature on racial trauma is very limited. Most of the research produced comes from the United States. It is anticipated that this research will help to fill some of this research gap and add to the scant literature on the neurocognitive correlates of racial stress. This study will also create further opportunities to facilitate a more diversified repertoire of race-based data to enable more equitable and informed neurocognitive studies.

Self-regulation, a collection of skills involved in the successful completion of goals, shows wide individual variation. Poor self-regulation during adolescence and young adulthood have been associated with both externalizing (e.g., risk taking and substance use) and internalizing behaviors (e.g., anxiety, depression), as well as poor academic achievement, outcomes which themselves have pronounced individual and societal repercussions. Further, childhood and adolescence are behaviorally and neurophysiologically (i.e. brain) sensitive developmental time periods for stress exposure. Children reared in toxic environments are at an increased risk for physical and mental ill health in adulthood. This research investigates individual differences in brain regions integral to self-regulation, alongside measures of day-to-day self-regulation, mental health, and adverse childhood experiences, in young adult and adult populations. We aim to more fully characterize the relationships among these variables and to determine the earliest stage of information processing where hypothesized impacts of stress and trauma exist. We will investigate the subjective impact of the stressful experience, the participant’s level of resilience, and the timing of the exposure, all factors which are believed to impact outcomes. Additionally, leg and torso length will be examined in relation to adverse childhood experience exposure, as past research has uncovered stunted growth of limbs as a result of high-stress levels. 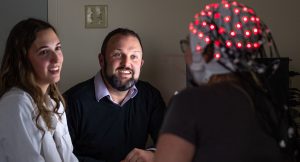 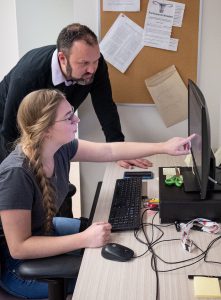