Mount student Nathan Horne was the recipient of the Andrew and Charles R. Bronfman Award in 2016. Nathan’s adventures included time spent shadowing three Members of Parliament and more. Read about Nathan’s week in Ottawa, in his words. 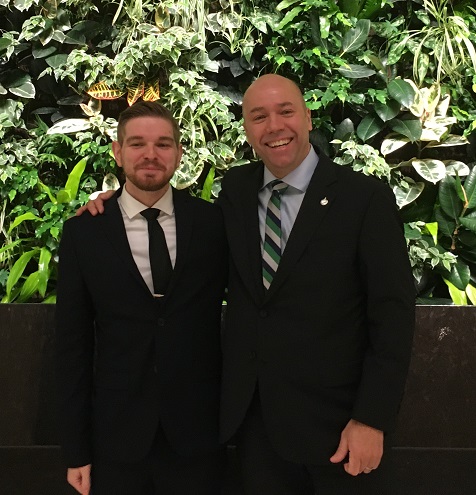 “[In] November, 2016, I was lucky enough to find myself the recipient of the Mount Saint Vincent University Political and Canadian Studies Department’s Andrea and Charles R. Bronfman Award in Canadian Studies.
This award is given to students who take Canadian Studies courses and submit an essay on a topic outlined every year in the application. This year the topic was: as Prime Minister, what would you immediately give attention to that the current government is failing to. My answer was the crises of indigenous people in Canada, their living conditions, incarcerations, land claims denials, and mental health.
This February 2017, as part of the award, I travelled to Ottawa for a week to see Parliament Hill and shadow numerous officials in their day-to-day operations on the front line of Canadian government. During my stay in Ottawa, I shadowed and met with two Members of Parliament, Darren Fisher for Dartmouth-Cole Harbour and Andy Fillmore for Halifax. I was delighted to discuss with them their passions and the causes they advocate for. Darren Fisher is very vocal about mental health support and awareness, while Andy Fillmore is an environmentalist.
I was able to shadow the Speaker of the House, the Honourable Geoff Reagan, and was given a full tour of Centre Block. I sat in on two question period sessions and saw what could be described as the most entertaining aspect of tradition and pageantry in Canadian government. I was treated to lunch in the parliamentary restaurant by MP Darren Fisher, and on one of my final days, I visited the Supreme Court of Canada, where I witnessed a hearing involving a pharmaceutical company and alleged fraud charges.
Altogether the experience was a once in a lifetime opportunity and I will never forget it. It has further motivated me to pursue a career in government and perhaps one-day sit in the House of Commons as a Member of Parliament myself. I would recommend any Canadian Studies students or students enrolled in the required Canadian Studies courses to pursue this scholarship next year and submit an essay. It is truly an invaluable experience.”