Thank you to Librarian Terry Paris for 42 years of dedicated service to the Mount. 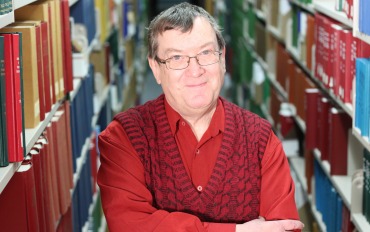 Congratulations on your retirement!

Terrence Paris graduated in 1970 with a Bachelor of Arts (with Honours in History) from the University of Manitoba and he received his Master of Library Science from the University of Western Ontario in 1972. That same year, he was appointed at the Mount in a term position as a Reference Librarian when the Library was located on the north side of Evaristus. In 1980, Terry gained a permanent position as Librarian II, and in 1990 he was promoted to Librarian III.

Over the years, Terry has made many contributions to the Library, the University, and the greater academic community. He has served on Senate, numerous library committees, and other collectives including the Art Gallery Advisory Committee and the EMF Centre User’s Group. Externally, he has served on Novanet Executive and Policy Committees. He has worked tirelessly within Novanet, most recently lending advice on a common ebook license for Nova Scotia’s university libraries.

In 1991, Terry compiled a Guide to Women’s Studies Resources, a book which is still available in several Novanet collections. Terry was also responsible for a forward thinking document entitled ‘Breaking the Mould’ which adjusted library acquisition budgets to create five discipline funds, laying the foundation for the library liaison model, increasing the partnership between librarians and faculty to improve research and teaching, and helping to build better collections to support these areas.

Compared once to “Prince Valiant“ by a writer for the Coast, Terry was the champion for the Library`s women studies collection, supporting it long before the library hired anyone dedicated to this subject area. With the help of Terry`s efforts and diligence, the Mount has one of the strongest LGBT collections in Atlantic Canada.

Of further significance is Terry`s recent sabbatical work, in which he researched the history of the Library`s rare MacDonald book collection. His sabbatical report details valuable and interesting titles, suggests further research, and strategies to better preserve and protect the collection.

Although Terry`s background is in history, he works with all subject areas, including the Mount`s science departments. Several librarians mention Terry as the person they approach for assistance with the most challenging reference questions no matter what the topic — he can navigate answers out of the oldest reference book or the newest online Statistics Canada data set.

A confirmed environmentalist, Terry walks to and from work every day, in every kind of weather. He is a seeker of adventure and an avid traveller, and has been known to entertain with photos and videos of his many worldwide trips, such as his vacation to the Galapagos Islands. Terry is a talented artist. He participates in university events and once won an award in the Tenth Annual University Community Art, Craft, Baking, Hobby and Talent show. It’s likely that Terry could also have placed well in the baking category. He is a master dessert chef, with squares and madeleines among his specialities. As an example of Terry’s wit and good humour, to mark his ’40th Jubilee’, he brought in homemade white chocolate, apricot and hazelnut squares, tucked neatly in to a vintage tin can with King George and Queen Elizabeth on the front – referring to how many times he has been Head Librarian or acted in that capacity – he said it was in honour of the many years in which he “sat on, under and beside the library “throne”. 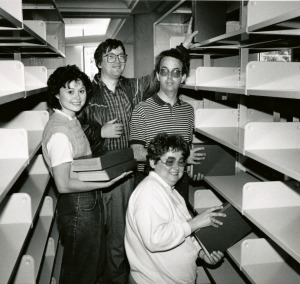 Terry has witnessed many events at the Mount over the years – including the evolving campus and the change in library technology, services, and resources. Terry began his career at the Mount working “up the hill” and experienced the excitement of the move “down the hill” to the `state of the art` E. Margaret Fulton Communication Centre.

Marcel Proust once said – “We don’t receive wisdom; we must discover it for ourselves after a journey that no one can take for us…” Terry holds this philosophy at work and for life in general; over the years he has always embraced change, innovation, and discovery.

Terry, thank you for your integrity, generosity, and commitment over the past 42 years, and congratulations on your retirement which we hope will continue to deliver adventures for you around every corner.