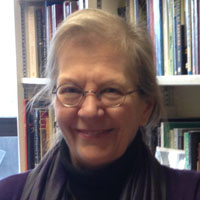 Dr. Warne is an interdisciplinary scholar who has published internationally on gender theory, the material and ideological conditions of knowledge production in the academy, and method and theory in the study of religion. Her ongoing interests include politics, gender and religion; North American cultural history, including social reform movements; and material and popular culture. She is currently supervising two theses, one on feminist performance art and disability, and another on the construction of madness in women’s life stages.

“Liminal Contradictions”. Invited critical response to Arnal and McCutcheon, The Sacred Is the Profane: The Political Nature of “Religion”. Oxford, 2013 for Method and Theory in the Study of Religion

“The Land of the Second Chance.” In The Prairie West as Promised Land, Francis and Kitzan (eds.), University of Calgary 2007.

“Gender” Guide to the Study of Religion, Braun and McCutcheon (eds), Cassell, 2000.