Mount students can now be part of a bigger conversation by learning a new language – Mandarin!

According to data gathered by Statistics Canada in 2008, the third largest mother-tongue group in Canada, behind English and French, speaks Chinese languages, including Mandarin. Worldwide, there are close to a billion people who speak the language.

The Mount’s Department of Modern Languages will offer Mandarin Chinese in the upcoming academic year. The course will be a study of the basic skills of Mandarin Chinese – speaking, listening, reading, and writing – as well as the cultural context in which they are used. Students looking for a stimulating elective or who wish to take the first step in becoming fluent in a new language are encouraged to enrol.

“We wanted to offer something new – something that students could really benefit from,” says Larry Steele, Chair of the Mount’s Department of Modern Languages. “Mandarin is truly a current, living language, and we encourage students to take advantage of this opportunity.”

Paula Barry, Manager of the International Education Centre, is also excited about the new offering. “This is great for students who may want to live, work, or study in Mandarin-speaking countries,” she says. “Students particularly interested in inte 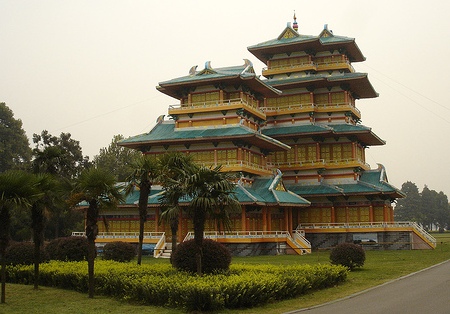 rnational exchange and co-op opportunities in China will also benefit from this course.” Paula hopes students interested in the China Summer Institute program, a unique exchange opportunity open to all Mount students, will take the opportunity to learn Mandarin.

The Institute is a three-week long program at Ginling College, shown at left, and students earn a 0.5 credit through their participation.

Mandarin Chinese I will be offered in fall 2012 and Mandarin Chinese II is offered in winter 2013. There is no prerequisite for the course other than students enrolling must not have any previous knowledge of the language. According to enrollment numbers on August 1, there are 10 spots remaining in the first section.

Next article »
At the Mount, ‘Girls Get WISE’ to Science
« Previous article
African research trip provides experience of a lifetime

Brian is a 2011 graduate who climbed the Great Wall of China during a three-week trip while he was a Mount student!