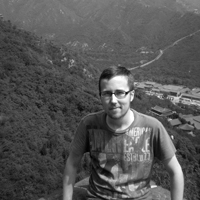 Born and raised in Cape Breton, Brian Smith describes his educational background prior to the Mount as ‘colourful’. “As a teenager, I decided to drop out of the education system,” said Smith. “But in 2005, I decided my high school diploma was a necessity for any work environment, so I decided to go back to school.

In 2007, Brian graduated from the Glace Bay Adult Education Centre as class Valedictorian, and received the Mount’s President’s Scholarship. “It was awe-inspiring, and one of the factors that drew me to the Mount,” said Brian. “I also chose to attend the Mount because it was here I knew I would gain the most educational and life experiences in a small and supportive setting.”

Brian enrolled in a Bachelor of Arts in English Literature, a fitting program for a student with a passion for the pen. “One of my passions is writing – in particular, writing poetry,” said Brian. “I was re-introduced to that passion during a second year Creative Writing class with Professor Clare Goulet. Since then I’ve taken countless classes with her, and she has motivated me to go beyond what I thought capable, and has given me advice I will use for the rest of my life.”

But Brian’s passion extends far beyond the classroom into his role as a father, partner and community member. Brian has been an active member of the Mount community, participating in Shinerama, the Trick or Eat campaign, as a frosh leader and as a participant in a conference hosted by the Mount’s English department. “These four volunteer experiences tie for top spot,” said Brian. “I feel like the Mount has been a four-year long special moment. I wanted to give back, because being involved is not only rewarding, but it’s a real-life social network. You get to meet individuals who can potentially give you experiences that last a lifetime. Volunteering gives back to you in ways you can never expect.”

One opportunity Brian had while at the Mount included a three-week student exchange program in China. “It was my first time on a plane – ever,” he said. “When we weren’t in classes, we had the opportunity to see what it was like to live in such a huge place. It was a truly amazing adventure – I got to climb the Great Wall of China.”

Brian graduated during the Mount’s 2011 Spring Convocation with a Bachelor of Arts degree, a major in English Literature and a minor in Writing. His sights are set on continuing education, and his hopes on becoming a published author. His parting wish is for students: “Take in as much as you can – from the Mount and its community – and have fun doing it.”