Established in 1873 by the Sisters of Charity of Saint Vincent de Paul, Halifax (as the order was known at the time), Mount Saint Vincent was one of the few institutions of higher education for women and girls in Canada at a time when women could not vote. The original purpose of the academy was to train novices and young sisters as teachers, but the Sisters also recognized a need to educate other young women.

By 1912, the Sisters recognized the need to offer greater opportunity through university education and adopted a plan to establish a college for young women. Two years later, in 1914, the Sisters partnered with Dalhousie University, enabling Mount Saint Vincent to offer the first two years of a bachelor’s degree program to be credited toward a Dalhousie degree.

In 1925, the Nova Scotia Legislature awarded Mount Saint Vincent the right to grant its own degrees, making it the only independent women’s college in the British Commonwealth. By 1951, the college offered degrees in Arts, Secretarial Science, Music, Home Economics, Library Science, Nursing and Education.

In 1966, the college became Mount Saint Vincent University (MSVU); university ownership and operations was transferred from the Sisters of Charity to a Board of Governors and Senate. This was also a period of tremendous growth with enrolment increases, new construction and new agreements. In 1967, MSVU began admitting men as students. In the decades that followed, the university continued to evolve, expanding its creative academic offerings to include Child & Youth Study, Public Relations and Gerontology (to name just a few), and furthering its research impact in a range of areas. In the 1980s, MSVU was also breaking ground in distance (now online) learning and co-operative education.

Today, MSVU is working to advance meaningful efforts in truth and reconciliation, support Black students and scholars, and ensure an accessible education to traditionally under-served populations.

In 2018, the Sisters of Charity–Halifax unveiled the Truth and Reconciliation Panel in the Heritage Garden on the grounds of Caritas Residence in Halifax. In acknowledging the Order’s history with the Shubenacadie and Kootenay Residential Schools, the panel reads:

The Indian Residential School system was established in 1867 with the goal of assimilating Indigenous children into Euro-Canadian society through its church-run, government-funded institutions. From its establishment until the closure of the last federally-run school in 1996, more than 150,000 Indigenous children were placed in residential schools across Canada. The students were punished for speaking their language, denied access to their culture and families, and, in many cases, suffered physical, sexual, and emotional abuse. The Sisters of Charity-Halifax were teachers, cooks and in charge of domestic tasks at Shubenacadie (Shubenacadie, NS) and Kootenay, also known as St. Eugene’s (Cranbrook, BC).

In looking toward the path forward, The Sisters of Charity–Halifax noted that “We can’t change the past, but we can listen deeply, with our hearts, to those who feel they can speak … we can work toward a future of hope, healing and right relationships.”

MSVU also acknowledges that Indigenous Africans were forcefully removed from their native lands and involuntarily dispersed across the world, that their labour was exploited to create wealth mainly for non-African descended people, and that inequity and systemic racism is still experienced by African-descendant people today.

In keeping with the objectives of the University to provide strong leadership role models, thirteen presidents have all been women. From 1925, when Mount Saint Vincent became the only independent women’s college in the British Commonwealth (and when few women had achieved PhD status) to the present day, women administrators from both the lay and religious communities have continually renewed the University’s commitment to provide a positive learning environment where women’s contributions and perspectives are valued. View a list of the Mount’s Presidents »

In 1951, a devastating fire broke out resulting in the destruction of the entire Mount campus, which at the time, was just one building. The fire left the Mount community understandably devastated and left students with nowhere to learn. In a time of great need, the people of Halifax were quick to step in and offer spaces all around the city where classes could be conducted until construction on Evaristus Hall was completed later the same year.

The generosity shown to the Mount community is why on the last Wednesday of January each year the Mount celebrates Caritas Day. The word caritas is Latin and means “charity.” The Sisters of Charity—Halifax (the University’s founders) established the day as a way to give back to the community through acts of kindness, volunteerism and charity. Caritas Day is a means of paying forward the tremendous support provided to the Mount family many years ago.

The Coat of Arms 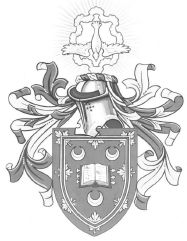 The University coat of arms was granted by the Heraldic College in London in 1966. It is based on the coat of arms of the family of Elizabeth Seton, founder of the Congregation of the Sisters of Charity. The three crescents are from the coat of arms of the Seton family. In the Seton arms, these crescents are tinctured red on a gold field. Blue and gold are the colours of the French arms and betoken affinity with Saint Vincent de Paul. The book represents knowledge; the maple leaves on either side, Canada. The dove, a symbol of the Holy Spirit, emphasizes that knowledge is a means of wisdom, the highest gift of God. Veritas ad Deum ducit, the University motto, translates as “truth leads to God.” A banner bearing the coat of arms is on display in the Library. It was made by Professor Robert Doyle, founding member of the Costume Studies Department at Dalhousie University.

A university logo was introduced in 1999. The origins of the logo lie in the coat of arms so it retains strong ties to the University’s history while taking on a more progressive tone. The logo is used for all but the most formal occasions.

The mace is a symbol of authority for the University Chancellor, and Mount Saint Vincent University’s mace is unique. It is believed that the Mount is the only university whose mace was made by a member of the institution’s own faculty. Carved by Barry Wheaton, Professor Emeritus of Religious Studies, and presented in 1978, the solid oak mace expresses the University motto with symbols and human figures.

Students receiving certificates and diplomas wear black gowns with white collars. Students receiving degrees wear black gowns with the appropriate coloured hoods. Hoods include a satin lining in the two university colours (light and dark blue), with a velvet edging in a colour specific to each degree. The velvet edging on a Bachelor hood is a 2″ wide trim and the band on the Masters hoods is 3″ wide velvet trim

Over the years since 1971, the Mount has bestowed honorary Doctor of Humane Letters (DHumL) degrees on women and men who have contributed to the betterment of society and humanity in any field, and who exemplify the University’s mission. View the list of honorary degree recipients.

Former presidents of the Mount