Adrian Downey, of Dartmouth, Nova Scotia, is an extremely well-rounded and passionate student. In fact, his academic experience extends far beyond his own studies through volunteer roles, research assistantships, tutoring and more. On Thursday, May 18, 2017, he’ll represent his graduating class as valedictorian at the Mount’s spring convocation. 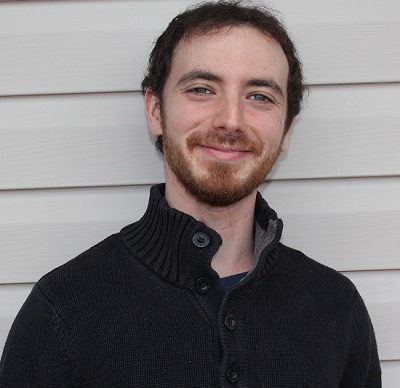 In reflecting on Adrian’s academic achievements, one of his professors noted that he excelled in his work on his Master’s thesis, titled “Speaking in Circles: Indigenous Identity and White Privilege.” More than just an academic endeavour, it explores aspects of Adrian’s own identity as a member of the Qalipu First Nation. He describes his thesis as “rooted in [his] own stories and experiences.”
“The focus of my thesis is Indigenous identity,” Adrian said. “It is about exploring and finding a place in society from which I can speak my truth.”
Graduating this spring with a Master of Arts in Education focused in curriculum studies, Adrian also holds a Bachelor of Education degree and a Bachelor of Arts degree with a joint major in Music and Education, both from Bishop’s University.
Adrian’s dream was initially to become a music teacher, which he achieved when he spent two years teaching music and grade six with the Cree School Board in northern Quebec. It was an experience that impacted him in a special way. “I had taken time to be myself and be alone with nature, yet also be part of a community,” he said. “It made me a more comfortable and confident person.”
Soon after, Adrian returned home to Nova Scotia with a renewed perspective. It was then that he decided to apply for the Masters of Arts in Education program at the Mount.

“Don’t let a negative culture affect how you perceive the world. Just be yourself and try to maintain positive relationships with yourself, your community, and our planet.” — Adrian’s advice to fellow students and graduates

While completing his Master’s, Adrian worked as a research assistant with four faculty, supporting research in the areas of academic appeals procedures, workplace and school-aged bullying, scientists in the media, arts-informed research, and meditation. “I’m really grateful for the research assistant positions,” he said, describing the experience of working so closely with researchers as “a rare gift.”
A personal highlight of Adrian’s time at the Mount was his work as a writing tutor in the Mount’s Writing Centre. “I liked seeing students’ writing and hearing their stories,” he said. “You can really see the best side of people come out in their writing.” 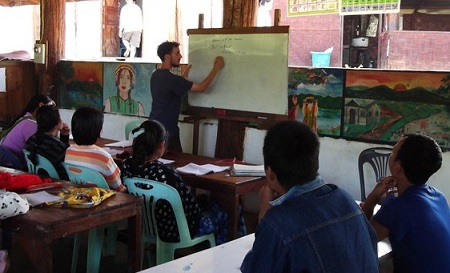 Further to his research and tutoring roles, he was also active on the University’s Internal Aboriginal Advisory Committee (serving as a graduate student representative) and Mi’kmaq History Month Committee. “One first step we have made toward reconciliation is to have the Mi’kmaq flag waving permanently on campus,” said Adrian. “Not every school does that. It’s something of which we should be proud.”
Adrian’s personal and academic ventures have contributed to his deep passion for human rights and Indigenous issues. For instance, his time spent serving as a volunteer teacher in Thailand with Burmese refugees inspired him to make the most of his own opportunities and to help raise awareness about causes such as the Karen Human Rights Group – an organization committed to improving the human rights situation for the Karen people in Burma.
This valedictorian’s plans for the near future will no doubt keep him busy. In the coming months, Adrian plans to help raise awareness about the revocation of Indian status from many members of the Qalipu First Nation, an issue which has touched him on a personal level. He will also be starting his PhD this fall at the University of New Brunswick.
Adrian offers some meaningful advice to fellow students and graduates: “Don’t let a negative culture affect how you perceive the world,” he said. “Just be yourself and try to maintain positive relationships with yourself, your community, and our planet.”
—————————————————————————————————————————————
Adrian Downey will deliver his valedictory address during the Mount’s afternoon convocation ceremony on May 18, 2017, which gets underway at 2 p.m. [watch the ceremony live online]
Next article »
Mount faculty receive NSERC Promoscience funding for new program
« Previous article
History (Honours) student named Mount valedictorian