The Food Action Research Centre (FoodARC) at Mount Saint Vincent University is committed to debunking food security myths and exposing the struggle of many families and individuals who do not have access to a nutritious diet in Nova Scotia (and beyond). A recent collaboration with interdisciplinary design students at the Nova Scotia College of Art and Design (NSCAD) and the Board Room Game Café, brought together the necessary players to create an interactive board game to help raise awareness of food insecurity issues.

Over the past 10 years, FoodARC has explored the challenges affecting those who have difficulty accessing enough of the right food in order to live a healthy lifestyle. Notably, research shows that even with effective budgeting, 1 in 5 Nova Scotian families is unable to access a nutritious diet – the highest rate among Canadian provinces. 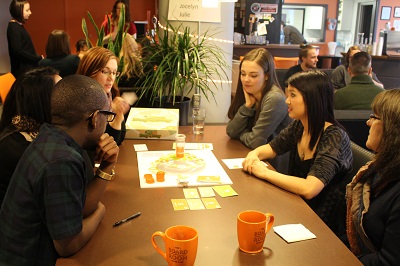 “We want to be able to start a conversation,” says Chris Stothart, Project Coordinator at FoodARC. “It’s about how to engage people in creative ways and we felt that a game or activity would be a way for people to put themselves in the shoes of someone experiencing food insecurity.”
The project began in a Mount classroom where Stothart and an Applied Human Nutrition course instructor, Sarah Shaw, presented a budgeting activity which was later presented at the Food Secure Canada Assembly in November 2014. Stothart then reached out to May Chung, associate professor of design, at NSCAD University to enlist the help of her students in creating an interactive game that leads players through a month in the life of a low-income household. “This collaboration is a wonderful opportunity to show that we have to work across disciplines and that we can’t expect one group to have all the expertise,” says Stothart. 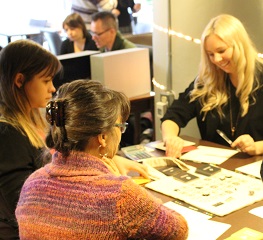 Four NSCAD student teams have conducted extensive research and consulted with local game experts to develop games featuring the obstacles to affording nutritious food. On Tuesday, February 24, students presented their prototypes at the Board Room Game Café where they were tested by a panel of judges. The panel was comprised of project partner representative, including Patty Williams and Madeleine Waddington, FoodARC; Lynn Langille, Department of Health and Wellness; Sam Fraser, Game Designer; and Gord Morrison, Graphic Designer.
“It was hard to find that middle-ground where you are designing something that shows the harsh reality of food insecurity but is still engaging, playful and factual,” says Brittany Hall, interdisciplinary design student at NSCAD. “We needed to inspire empathy that will encourage others to make a change.”
Among the prototypes presented on February 24 was The Hand You’re Dealt which judges recently announced as the winner of the game design challenge. This card game challenges players to budget their money in the hopes of completing the game with minimal debt. As players pull cards from the deck they are faced with fixed and additional expenses forcing them to make tough decisions that may not leave them with enough money for nutritious food.
As the winning game, The Hand You’re Dealt will be embedded in FoodARC’s knowledge mobilization toolkit that will be used by associations such as Public Health, family resource centres and in other community activities. The game will provide an illustrative way of raising awareness and hopefully encourage players to support necessary social and policy changes.
Next article »
Let’s dream together
« Previous article
Nutrition students part of national food product development competition