To the MSVU community,

It is with profound sadness that I write to you on the news of the death of a stand-out leader, feminist and cherished member of the Mount Saint Vincent University family, Dr. Alexa McDonough, OC, ONS.

To summarize her legacy in one paragraph is impossible; what follows only begins to describe some of Alexa’s many accomplishments. Though many of us came to know her through her political work, she’s been a force for change since her teens when she led her youth group to fight the deplorable conditions in Africville. She was a social worker, reporter, teacher and politician. She fought for worker health and safety improvements, human rights protections and pay equity, and has been a champion of international development and peace advocacy. Also a strong advocate for women in politics, she was elected the leader of the Nova Scotia New Democratic Party in 1980, becoming the first woman to lead a major, recognized political party in Canada. After 14 years leading the NS NDP, she led the federal NDP from 1995 to 2003 and then continued to serve as an active member of parliament until her retirement in 2008. She remains the only woman in Canada to have been leader of both a provincial and federal party.

Alexa received an honorary degree from MSVU in 2009, and served as the university’s interim president from 2009 to 2010.  I invite you to view a photo album from Alexa’s time at MSVU at the bottom of this message.

In 2013, MSVU’s Institute for Women, Gender and Social Justice was re-named the Alexa McDonough Institute for Women, Gender and Social Justice (or AMI) through the fundraising efforts of a group of labour union representatives. The institute’s mission reflects what Alexa spent her career fighting for: equity and improved lives across communities through feminist initiatives, activism and a dedication to social justice. And it is fittingly housed in the Margaret Norrie McCain Centre for Teaching, Learning and Research at MSVU – the only building on a Canadian university campus dedicated to celebrating the accomplishments of women.

You can read Alexa’s obituary here. Her family has requested that all condolences, memories, and thoughts be shared in the online book of condolences available at jasnowfuneralhome.com so that they can be preserved in one central place. The flags on campus will be lowered to half-mast in her honour.

Alexa stands out in our history of strong women leaders at MSVU. And she’s held warmly in our hearts for her deep compassion and caring for all. We were so very fortunate to have had her as part of the MSVU family. I was so very fortunate to call her a friend. We will take up her torch through the continued work of her namesake Alexa McDonough Institute and ensure her legacy never fades. 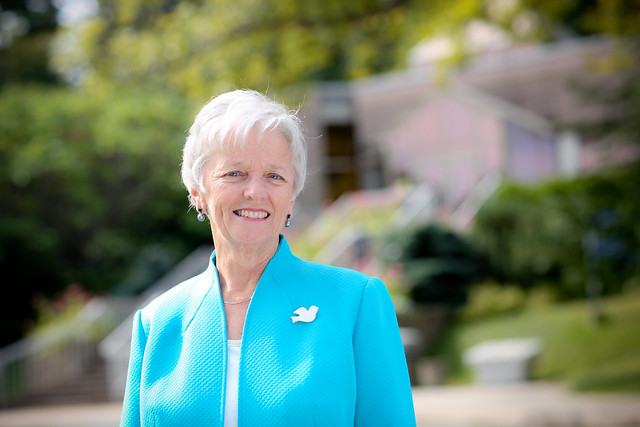 Next article »
Announcing the 17th Nancy’s Chair in Women’s Studies at MSVU
« Previous article
The Healing Thereafter: Panel to discuss intergenerational trauma caused by residential schools and the Sixties Scoop