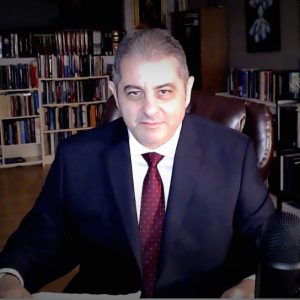 Dr. Chérif F. Matta, Professor and Chair of the Department of Chemistry and Physics at Mount Saint Vincent University, has been elected to the 2021 class of American Association for the Advancement of Science (AAAS) Fellows, one of the most distinct honors in the scientific community. He has been elected for his work in theoretical chemistry and biophysics.

Founded in 1848, AAAS is the world’s largest general scientific society and publisher of the journal Science, which has the largest paid circulation of any peer-reviewed general science journal in the world. Electing AAAS Honorary Fellows is a tradition dating back to 1874 and honorees include such notable scientists as W.E.B DuBois, Maria Mitchell, Steven Chu, Ellen Ochoa, and Irwin M. Jacobs, two recipients of the 2021 Nobel Prize – Ardem Patapoutian (Medicine) and Syukuro Manabe (Physics) – and one of the previous year’s Laureates, Jennifer Doudna (Chemistry).

“AAAS is proud to bestow the honor of AAAS Fellow to some of today’s brightest minds who are integral to forging our path into the future,” said Dr. Sudip Parikh, AAAS chief executive officer and executive publisher of the Science family of journals. “We celebrate these distinguished individuals for their invaluable contributions to the scientific enterprise.”

As a member of the 2021 class of AAAS Fellows, Professor Matta joins a cadre of 564 scientists, engineers, and innovators spanning 24 scientific disciplines who are being recognized for their achievements across disciplines ranging from research, teaching, and technology, to administration in academia, industry, and government, to excellence in communicating and interpreting science to the public.

An avid researcher, Dr. Matta is known globally for his work. His research focuses on theoretical and computational (bio)chemistry and (bio)physics, with a primary focus on analyzing electron density and an interest in problems related to biology and material science. His papers have been cited hundreds of times, he serves as referee for dozens of research funding organizations worldwide and he has been a guest editor for a number of journal special issues. Dr. Matta lectures and publishes in English, Arabic, French, and Spanish.

“Indebted is how I feel, to my nominators, mentors, students, colleagues at Mount Saint Vincent University, and collaborators especially here at MSVU – all of whom helped me pursue my passion for research and teaching. I have been fortunate to cross paths with these talented and generous people who, out of fear of missing someone, I will not name individually – but grateful, I am – thank you,” said Dr. Matta.

Becoming an AAAS Fellow is a lifetime honour, coming with an expectation that recipients maintain the highest standards of professional ethics and scientific integrity. Dr. Matta is no stranger to professional recognition – he is a recipient of MSVU’s Research Excellence Award, a current member of the International Union of Crystallography’s Commission on Quantum Crystallography, and an elected Fellow of three learned societies – all UK-based – covering the three intersecting areas of his research (chemistry, physics, and biology). He is a Fellow of the Royal Society of Chemistry (FRSC), Fellow of the Institute of Physics (FInstP), and Fellow of the Royal Society of Biology (FRSB). Dr. Matta is also the recipient of several NSERC and CFI grants, the most recent being CFI’s John R. Evans Leaders Fund (JELF). He was elected Chair and Lead Organizer of the Sagamore 2018 triennial conference of the International Union of Crystallography – an event bringing scientists from 27 countries to Halifax, won an NSERC Science Exposed (Jury Prize) in 2016, and has been a recipient of the highly regarded Lady Davis Fellowship in Medicine. Dr. Matta also has a track record of service culminating in his recent selection to Chair the Interdisciplinary Adjudication Committee of the Canada Research Chairs (CRC) Programme of the Tri-Council of Canada, and he is also a Member of the Board of Directors of the Canadian Society for Chemistry (CSC).

Members of the 2021 class of AAAS Fellows will receive an official certificate and a gold and blue rosette pin to commemorate their election (representing science and engineering, respectively) and will be celebrated later this year during an in-person gathering when public health guidance permits. The new class will also be featured in the AAAS News & Notes section of the January 2022 publication of Science. Congratulations, Dr. Matta!

Next article »
A message to the MSVU community on the identification of unmarked graves at site of former St. Joseph’s Mission Residential School
« Previous article
COVID-19 updates: Return to on-campus learning, updated vaccine requirement, and more