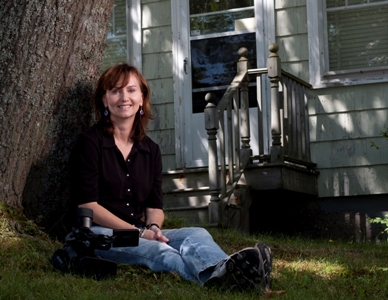 There are many issues in the world that command attention, from war and political unrest, to celebrity and spectacles. However, there are many topics that lurk in the background while louder issues take precedence. For Dr. Meredith Ralston, Chair of the Department of Women’s Studies at the Mount (1998 to 2016), “sex tourism” is an important subject that is often drowned out by the noise.

Dr. Ralston was the keynote speaker at the recent Beyond Borders Media Awards (BBMA), a program that rewards journalists and filmmakers who shed light on the subject of sexual exploitation of children around the world. Dr Ralston’s documentary Selling Sex in Heaven, which looked into the world of sex tourism in the Philippines, won a BBMA in 2007. Researching the topic of sex tourism and prostitution is something that has been of interest to Dr. Ralston for more than a decade.

“My PhD research was on homeless, addicted, prostituted women in Halifax,” says Dr. Ralston. She began a research project on prostitution in the Philippines with a colleague from Saint Mary’s University in 1995. Later, she worked on a five-year development project in Gambia with fellow Mount professor, Dr. Stephen Perrott.

Since spending time researching sex tourism in the Philippines, Dr. Ralston feels she has acquired a more nuanced view on the topic.

“Until the Philippines can change their position in the globalized economy, [prostitution] will remain a way for people to make a living,” she says.

Dr. Ralston is continuing to research the issues related to prostitution worldwide. She is currently working on a new documentary, tentatively titled Selling Sex Globally, Her new film takes on the controversial topic of consenting adults working as escorts, prostitutes and in other avenues of sex work. For this film she follows an American escort who is an activist for her cause.

“I’m not sure of her motivation [for doing the documentary], but she has become an activist,” Dr. Ralston explains. “For her, the cause outweighs the danger of being so visible.”

With more than five film credits now to her name, and a sixth on the way with Selling Sex Globally, Dr. Ralston is pleased to be able to bring topics like sex tourism to the forefront for discussion.

Selling Sex in Heaven is available to borrow from the Mount Library.