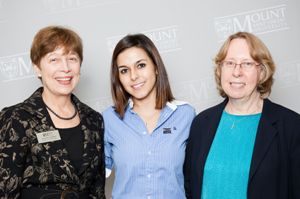 Mount students hail from all corners of the world. With a culturally diverse campus, there is always a new story to tell about someone who has grown up abroad and found their way to the Mount for their post-secondary experience.

One such person is Katayoun (Kat) Moaven, a Tourism and Hospitality Management (THMT) student who is now completing her final semester. Kat has had a unique life, and comes to the Mount with experiences in three distinct cultures and the ability to speak five languages.

Born in Iran to Persian parents, Kat lived in the Middle Eastern nation of Iran until she was ten years old, when her family relocated to Malaysia. She received most of her upbringing in Kuala Lumpur, attending school and learning in a “melting pot” of cultural diversity.

When she was 18, Kat moved once more. This time, she went to the UK to attend post-secondary at the University of Surrey in England.

“I didn’t know what I wanted to do, and my teachers suggested medicine, engineering or law,” she says. “In British education you really have to know what you want to do at 18, so I went with Law and French Law.”

While living in the UK, Kat got her first taste of working in the tourism and hospitality industry, though she’d been well acquainted with hotels and travel all of her life.

“I worked in a hotel and became passionate [about tourism and hospitality] through that,” says Kat. “Persian culture is very hospitable. Making people feel at home is very important to me.”

When Kat realized her true passion lived in a sector far different from the one she was studying, she chose to complete a certificate in Law and French Law, and started looking for ways to get involved in the industry that had sparked her interest from a young age. This is how she found her way to the Mount, to take the THMT program and, she hopes, to start her own hotel chain someday.

“I chose the Mount because it’s small,” says Kat. “It’s amazing. The professors are so nice to me, I’m not a number. I’ve spent an hour just talking to a professor about Persian food; they feel much more like my friends.”

As for Canada, Kat is looking forward to exploring opportunities available in other parts of the country once she completes her coursework.

“I love the culture of Quebec. Montreal is the right combination of European and North American culture,” she says. But with such a busy upbringing, Kat admits that it would be nice to settle down a little bit.

“I don’t want to move a lot anymore,” she says. “Travelling is fine, but moving gets harder the older you get. You get attached to the places and people.”

As Kat moves on from the Mount to start her career in the industry she is passionate about, she looks forward to seeing where she will end up. Whether she identifies as Persian, Iranian, Malaysian, or, now, Canadian, she truly considers herself a citizen of the world.

And now that she’s graduating, Kat happily goes forward with a new culture to call her own, as a member of the Mount’s globe-spanning community.