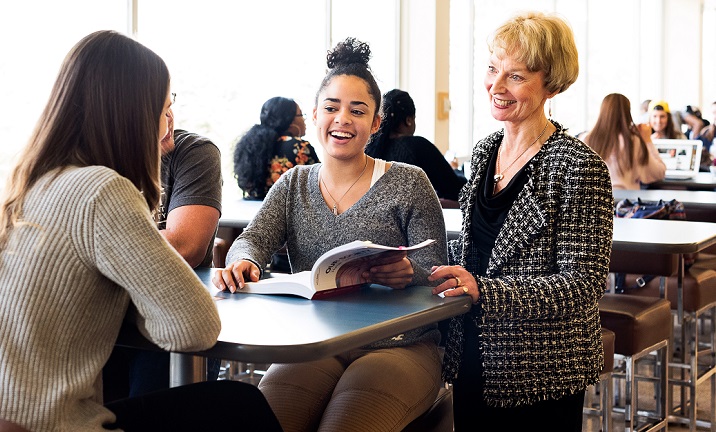 Status of Women Canada declared the theme for this year’s International Women’s Day to be #MyFeminism, which they describe as a celebration of “the feminists who inspire others through their determination to make a difference. They are the activists, advocates, and allies who continue to lead the way towards positive change.”

The Mount community includes many of these feminist leaders and change-makers. They are embedded across our departments and programs and they are also formalized through certain initiatives – for example:
– the Mount’s Alexa McDonough Institute for Women, Gender and Social Justice (chaired by Dr. Amy Thurlow of Communication Studies),
– the Women in Science and Engineering (WISE) Atlantic program (led by NSERC chair holder Dr. Tamara Franz-Odendall of Biology),
– the Centre for Women in Business (led by Executive Director Tanya Priske), and
– our Nancy’s Chair in Women’s Studies (currently held by El Jones).
As well, student-led efforts at the Mount focused on advancing gender equity include the MSVU Feminist Collective and an upcoming conference featuring women in politics being organized by student leaders from the Mount and other institutions in recognition of the 100th anniversary of women’s right to vote in Nova Scotia (though notably not all women – a topic that will be explored at the event).
We are also working outside our walls on efforts that include a focus on the advancement of women. Late last year, Canada’s university presidents declared their unanimous support for advancing equity, diversity and inclusion on campus and in society through the adoption of a set of seven principles and an accompanying action plan. (You can read more here.) The Mount was also at the table last week, as Universities Canada convened a discussion on strategies to advance women leaders in post-secondary education. Another discussion focused on strategies for increasing and measuring equity, diversity and inclusion in universities.
In other national news, I was delighted to see the recent investments in women by the Government of Canada (in their 2018 budget). Increased funding for research included a focus on supporting women researchers. There is also new funding for women entrepreneurs, feminist international assistance, and efforts to address gender-based violence, sexual assault and harassment.
Kudos to the Alexa McDonough Institute (AMI) for their recent hugely successful and “sold out” Girls Conference. This has become a key event in recognition of International Women’s Day in our province for its wonderful emphasis on empowerment of young women. Each year, the audience of girls at this event increases – meaning each year more young women join us in our continued efforts towards an equitable future for all women. It’s also of note that this past fall the AMI added a second event to its girls-focused annual gatherings. On October 11, 2017, they held their inaugural UN International Day of the Girl Child celebration – an event featuring performances by nine inspiring young Nova Scotian women of diverse backgrounds.
The Mount’s strong commitment to the advancement of women and girls is rooted in a long history of advocacy and support for women, in particular ensuring access to education. Established by the Sisters of Charity—Halifax in 1873, the Mount was one of the few institutions of higher education for women in Canada at a time when women could not vote. Today, we remain an organization steadfastly committed to the advancement of women.
And though there is lots being done (by the Mount and others), there is always more we can and should be doing. In fact, there is still much work that needs to be done to ensure a strong and equitable future for today’s young women. As well, we need to ensure our efforts are inclusive of trans and gender diverse people.
I encourage you to take some time to reflect on the meaning and importance of International Women’s Day, and the role you can play in helping ensure a bright future for all women.
Mary
Dr. Mary Bluechardt
President and Vice-Chancellor
Mount Saint Vincent University
Next article »
#GirlPower in action: Humanitarian moonlighting in the Red Chamber
« Previous article
Nutrition students taking on national food product development competition