Mount Saint Vincent University will recognize the achievements of several hundred students during spring convocation ceremonies on May 18 and 19, 2017. Graduates will be joined by three honorary degree recipients, including one of the best female hockey players in the world; a passionate local supporter of community, arts and mental health initiatives; and a dedicated champion of arts and culture in Canada. 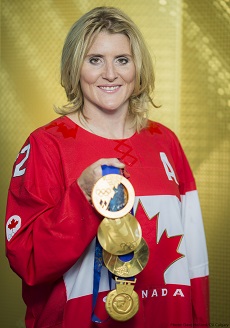 Hayley Wickenheiser, OC, BKin, MSc, is regarded as one of the best female hockey players in the world. Hayley joined the Canadian Women’s National Hockey Team at age 15 and has since won innumerable championships, five Olympic medals (four gold and one silver), and been named most valuable player at both the 2002 and 2006 Olympics. Off the ice, Hayley’s achievements are also many: she’s been named among the toughest and most influential athletes in the world by Sports Illustrated, The Globe and Mail, and QMI Agency. In 2011, Hayley was appointed to the Order of Canada and, in 2015, she was inducted into Canada’s Walk of Fame. Hayley’s passion for sport is matched by her desire to give back to the community through her work with organizations such as JumpStart, KidSport, Project North, Right to Play and others. One of Hayley’s most significant community projects was the creation of the Canadian Tire Wickenheiser World Female Hockey Festival, which offers a special training experience for 2,000 young female hockey players from around the world each year. 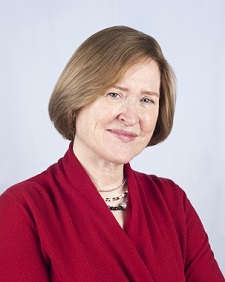 Elizabeth G. Fountain, DCnL, was born in Halifax and is an alumna of Mount Saint Vincent University. Since graduating in 1979, Elizabeth has worked alongside her husband, Fred Fountain, in the areas of law and business while at the same time remaining committed to family, volunteer service and charitable giving.Elizabeth and her family have been dedicated supporters of countless community organizations including, to name just a few, the St. Margaret Sailing Club, Laing House, the QEII Health Sciences Centre Foundation, Canadian Museum of Immigration at Pier 21, Symphony Nova Scotia, National Gallery of Canada, National Arts Centre, University of King’s College, Dalhousie University (including the creation of the Fountain School of Performing Arts), and Mount Saint Vincent University. In the wake of their son Alex’s tragic death from suicide in 2009, Elizabeth and Fred, together with the QEII Health Sciences Centre Foundation, created the Stay Connected Mental Health Project which aims to improve collaboration among mental health service providers and includes university specific initiatives. Also, to honour Alex’s memory and his spirit, they created the annual Alex Fountain Memorial Lecture at the University of King’s College where the speakers are nominated and chosen by the students. 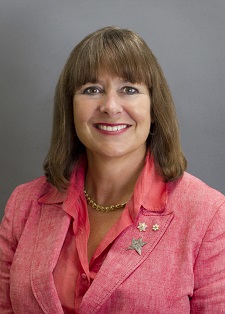 Gail Asper, OC, OM, LLD, is President of The Asper Foundation, which spearheaded the creation of the Canadian Museum for Human Rights in Winnipeg. She practiced law for a number of years in Halifax before joining Canwest Global Communications Corp as General Counsel, Corporate Secretary and a Director in 1989. She has chaired the Boards of numerous not-for-profit groups and led annual, capital and endowment campaigns including for the Royal Manitoba Theatre Centre, United Way and The National Arts Centre Foundation. She is a member of the Board of The Canadian Museum for Human Rights and is a Governor of the Hebrew University of Jerusalem. For the last 14 years, Gail has worked to develop the Canadian Museum for Human Rights, which opened in Winnipeg in 2014. She has received numerous awards for community service, including The Governor-General’s Ramon John Hnatyshyn Award for Voluntarism in the Performing Arts, the Order of Manitoba and is an Officer of the Order of Canada. She holds honorary doctorates from the University of Manitoba, Carleton University and the Hebrew University of Jerusalem.

As a leader in distance and experiential learning, and based on a strong tradition of social responsibility, Mount Saint Vincent University takes a personalized approach to education to nurture socially responsible global citizens. Founded in 1873, the Mount has been nationally recognized for having one of the lowest student-to-professor ratios, for providing students early access to valuable research opportunities, for its legacy in the advancement of women, and for facilitating critical advancements in food security, healthy aging, literacy, and childhood development.