Testing the waters ‘up north’ 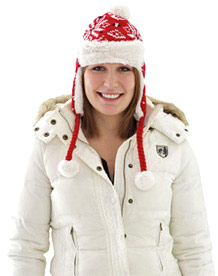 “It’s a small community at the Mount, but you get the feeling while you’re there that you can accomplish a lot.”

Learning outside the classroom

Originally from Sydney, Nova Scotia, Erin Van Dusen had a big dream of taking an education degree to places beyond North America. When Erin discovered the possibility of combining her studies at the Mount and love of adventure, it was an opportunity she couldn’t resist.

“I heard about this program where I’d be able to experience all these new things, but within my own country.”

Through generous sponsorship opportunities, a travel bursary program was developed at the Mount that facilitates a four-week teaching excursion to Nunavut’s Baffin Region for Education students who are interested in considering teaching in the North.

Erin will head to Kimmirut, a rural community with approximately 400 people, in March 2012 where she will be teaching grade seven students at a K-12 school that educates 130 students. An avid lover of the outdoors, Erin is looking forward to learning more about the northern culture by taking part in ice fishing and hunting expeditions.

She credits Nick Newbery, one of the program coordinators at the Mount, for making the extra effort to find out-of-classroom experiences for each of the students going on the teaching mission. “Nick has put me in touch with a couple of people he knows in the community who are active fishers and hunters,” says Erin. “He has gone above and beyond for us.”

The four-week teaching practicum provides the students with an orientation of the North before they commit to a longer term. Erin, who has also received a Bachelor of Arts degree from the Mount, will be trained to become a social studies and English teacher at the secondary level. While she is contemplating a contract in the North, she hasn’t made any final decisions. One thing Erin knows for sure is that her goal will be to model her teaching style after that of her Mount professors.

“The professors were always very personable with us. I always had a sense of belonging,” she says. “As a teacher, I would want to make my students feel the same way.”