Daniel Andrews has his sights set on the future as he prepares to graduate from the Mount later this month with his Bachelor of Science Honours degree in Biology. He will be continuing his studies at UBC in Vancouver next year, but before he leaves Halifax, he’s taking some time to reflect on his undergraduate experiences. 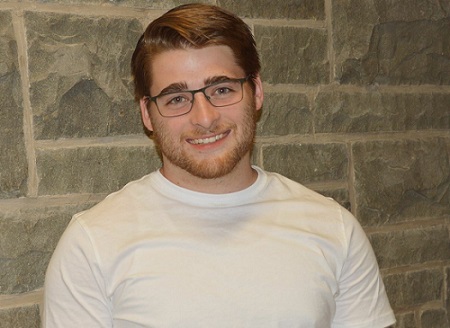 “I had so many opportunities around me,” he says. “I came as a first-year student not knowing anything about the Mount. I am glad I chose it and I think I wouldn’t have had the same experience at any other school. There’s a lot of space for people to do what they want to do.” Daniel has worked on his honours thesis for the past year and a half under the helpful supervision of Dr. Tamara Franz-Odendaal, NSERC Chair for Women in Science and Engineering—Atlantic Region and Biology professor at the Mount. The two have worked together since Daniel’s second year. “She offered me an opportunity to volunteer in her lab almost right away,” he says. “I don’t feel like I would have gotten that at a bigger university.”

“I never really thought about trying to win awards. I was appreciative of them because it validates the amount of work I’ve put in over the last couple of years.”

The research Daniel has been doing involves bone growth and development in animals, and how that process differs among various species. The particular area of focus, he says, is on the eyes and cranial structures of the animals. (His thesis, published in print but not yet available online, is titled “Cell Dynamics in a Novel In Vitro Culturing Technique for Embryonic Chick Eyes”.) The findings could eventually help scientists understand how the structures form and what causes them to form in humans with eye diseases. Daniel’s diligence as a researcher and his presence on campus have earned him plenty of recognition. He is a Don at the Westwood residence and has twice received the Science Student Society award. He has also received the Sister Lua Gavin scholarship and the Lillian Wainright scholarship. And when he goes to study for his master’s degree in biochemistry and molecular biology, it will be possible because he won a highly competitive scholarship from the Natural Sciences and Engineering Research Council of Canada. “I never really thought about trying to win awards,” he says. “I was appreciative of them because it validates the amount of work I’ve put in over the last couple of years.” Daniel says he worked long hours to make it to the finish line. He recalls having a breakthrough when he conducted an experiment and got a result that connected a lot of dots for him. “I was just kind of jumping around, extremely excited,” he says, laughing. “That’s when I realized how excited research gets me and how much I enjoy being in a lab and making discoveries.”

“My ultimate goal is to be able to make a noticeable impact on the field of medicine or health research.”

He says Dr. Franz-Odendaal was supportive and allowed him to have a lot of input on the research he was doing. He will be back in her lab this summer reviewing the research they’ve done and possibly publishing some of their findings.

“I’m thankful she gave me the opportunity to work in her lab, because I don’t think I would be here right now if it wasn’t for her,” he says. Daniel says it’s important to balance his time in the lab with outside interests. He enrolled in a pair of music-focused Cultural Studies courses this year and also enjoys going for a run or playing baseball. All positive diversions from the stresses of everyday life. “When I’m cooped up in a lab for nine hours a day, it’s nice to get out and get some fresh air,” he says. He will also spend some time travelling before he heads to Vancouver in January to continue his studies. A native of Sydney who moved to Halifax for university, Daniel says he is eager to see the west coast for the first time. For now, however, he remains focused on continuing down the academic path he started four years ago at the Mount. “I think research, whether it’s government research or something like that, would be the end goal,” he says. “My ultimate goal is to be able to make a noticeable impact on the field of medicine or health research.”