Pride Month 2021: A message from the Interim President

While Pride Month is celebrated during the month of June in much of Canada, in Halifax and at Mount Saint Vincent University we typically recognize Pride in July. This is when the Halifax Pride Festival is usually held, and when the MSVU community participates in events like the Pride Parade. The Halifax Pride Society has announced that it will delay the 2021 Halifax Pride Festival until August 12-22, 2021, with more details being released in July. While we’re not yet sure if there will be a parade – which we’ve taken part in for the past couple of years – MSVU looks forward to participating in the festival in some way. 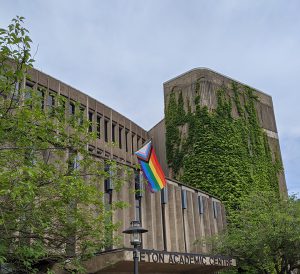 Regardless of when we can come together to formally recognize Pride, Mount Saint Vincent University stands firmly with the 2SLGBTQIA+* community. We embrace all that makes each of us unique, including sexual orientation, gender identity, and gender expression. We are grateful for the contributions of MSVU community members engaged in 2SLGBTQIA+ research, course delivery and development, support services and advocacy work.

The Halifax Pride website reminds us of the history of the pride parade and the issues that drove its development: “Members of the city’s gay and lesbian community organized [the first] Pride Week [in 1988] without the benefit of legal protections. Amidst growing unrest about rampant prejudice and discrimination, that first Pride March was primarily a protest over the lack of legal protection from discrimination, and the all-too-common threat of homophobic violence.” While we celebrate the gains that have been made, we must always strive to do better as a society, a community and a University.

The Progressive Pride Flag was raised on campus last week on the pole attached to the Seton Academic Centre. The flag, which was provided by the MSVU 2SLGBTQIA+ (Pride Advocacy) Committee last year, includes additional colours to represent trans, Black and Indigenous people, and people of colour. It demonstrates that the 2SLGBTQIA+ community stands in solidarity in the fight against all forms of discrimination, harassment and violence. I would like to thank the Pride Advocacy Committee for the important education, awareness, and advocacy work they are doing. It is very much appreciated by the University community. Stay tuned to the MSVU website and social media sites this month for a profile on the Pride Advocacy Committee.

As well, I’m excited to share that this month, Facilities Management will be re-painting the MSVU Pride Stairs that lead to Evaristus from College Road in the Progressive Pride Flag colours. The painted stairs have become a symbol on campus of the University’s commitment to being a leader in the removal of systemic barriers so that all students, faculty and staff – especially those from underrepresented groups, including the 2SLGBTQIA+ community – can fully participate in the university experience. Plans for more physical symbols on campus are in the works. Stay tuned for details.

I encourage you to show us how you’re recognizing Pride this year by using #MSVUPride on social media.

*2SLGBTQIA+ is an acronym for two-spirit, lesbian, gay, bisexual, transgender, queer, intersex and asexual, while + stands for other ways individuals express their gender and sexuality outside heteronormativity and the gender binary.