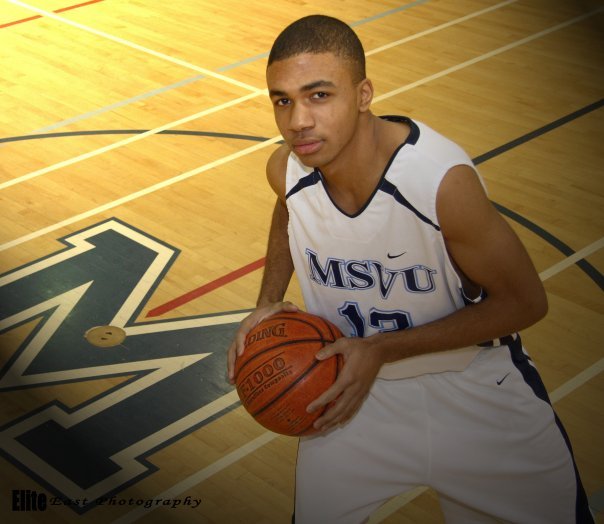 Mount students hail from many unique backgrounds, each with a different story about how they came to the Mount and why they chose their program. For Derico Symonds, Mount basketball player and fourth year Child and Youth Study student, the program was the obvious choice. Derico was raised in a Halifax community that he calls “the Pubs,” or as it is more commonly referred to, public housing. His decision to not only further his education, but to join the Child and Youth Study program, was directly related to the way he grew up, and how other kids were growing up all around him.For years Derico has been involved in youth-based organizations with the goal of making a difference for kids growing up in areas like the Pubs. Working with St. Andrews Recreation Centre and the Halifax Youth Advocate program, he has spent the past seven years dedicated to helping kids stay active and stay out of trouble. “I felt like I needed to [help],” says Derico. Since he began working with youth groups he has been involved in after school programs, planning events, leading summer day camps, and was the basketball coordinator for youth aged 7-13 and 15-18. His biggest achievement, however, was designing his own program to help up-and-coming junior leaders become ready for the challenging role.“It’s called Youth Step Up; it’s a junior youth leadership program,” Derico explains. “A lot of youth are not ready to be junior leaders, so I decided to design a program to teach them what helped me. We go on trips and outings, and I design quizzes for them.” In the future he hopes to bring in speakers for the program that he describes as both educational and fun.Something that Derico is intent on teaching the youth he works with is that they truly are capable of accomplishing anything, including, in his case, a university education.“I wanted to show that I could do it,” he says of his decision to go to the Mount. He admonishes those who say, “I can’t,” and reinforces the idea that anyone can do anything they set their mind to.“No matter where you come from or what you’ve been through, you can change it,” Derico says. “I [don’t like] listening to people who think they can’t do something. You always can. It’s just a challenge.”Beyond his extraordinary commitment to education and youth, Derico is your typical university student. He’s a member of the Mount Mystics Men’s Varsity Basketball team, his favourite movie is Coach Carter, his favourite artist is Lil’ Wayne, and his favourite hobby is eating. He even admits an affinity for the comedy show Family Guy, though he says he doesn’t have much time for TV.Ultimately, though, Derico just wants to be able to help. While he’s not sure about where his life will take him after he graduates, he’s committed to continuing his work as an advocate for underprivileged youth. “I just want to make a difference,” he says. It’s clear to those who have met Derico, the soft-spoken and determined Mount student from the Pubs, that he already has made a difference for many kids, and will continue to do so long after he’s graduated.