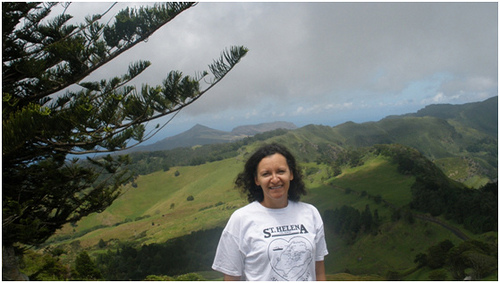 St. Helena, a remote island of volcanic origin, is located in the South Atlantic Ocean between West Africa and Brazil. The historic Island welcomes a small number of tourists annually, but none perhaps more motivated by family heritage than the Mount’s own Dr. Susan (Susie) Brigham. A professor in the Faculty of Education, Susie recently spent three months in St. Helena as a researcher and tourist, accompanied by her husband and two daughters.Susie’s mother emigrated from St. Helena to the United Kingdom (UK) at the age of 15 years to work as a domestic worker– a common path for women between the 1950s and 1970s. Susie was intrigued by this phenomenon and sought to investigate the effects this mass departure left on St. Helena and the families left behind.While away, Susie sent frequent reports back to the Mount, sharing stories of her research and of the people she met along the way. Susie was also an avid photo journalist, capturing people and places that conveyed the Island’s beauty. But as she noted, the Island’s beauty is balanced by a brutal history of slavery. “I dug through the archives – all the original documents were available,” said Dr. Brigham. “Ever since the British settled in St. Helena in 1659, they brought slaves to the island on the homeward run from Madagascar, India, Malaysia and West Africa. Slavery was abolished by 1807 in England, but continued up to 1833 in the British colonies. Of the thousands of slaves who were brought to the Island, hundreds bought their freedom and integrated into the community. It is speculated that my great grandmother Susan Mary – which incidentally is also my name – was a daughter of a slave.”While in St. Helena, Susie had the opportunity to balance work with pleasure, taking time with family to explore the Island’s culture and beauty. “We took a helicopter tour of the Island, visited with relatives and newfound friends over many dinners, tea parties and picnics, and went swimming at Ruperts, the historic location where many sailors, settlers and slaves came  ashore and were quarantined,” she said.Susie noted the family wasn’t able to purchase customary North American foods such as fresh dairy products and certain fruits, but she discovered the delicacy of the Island’s conga eels, the many exotic fruits and vegetables, and unique Saint Helena dishes such as “plo” and spicy fish cakes.As a researcher with a Saint background Susie was welcomed with open doors as she met the Governor, the Bishop, select government employees, and several women who had traveled to the UK in the 1950s, 60s and 70s but had since retired in St Helena.  “The kindness from St. Helena’s people truly left a mark on my heart,” said Susie. “Saints are the most generous folks in the world.” Susie’s three-month adventure to the Island of St. Helena will certainly provide her with lasting memories. Click here to read what lead Susie on this adventure

Click here to see photos of her time on St. Helena

Read more about the Mount’s Faculty of Education

The Mount now offers a PhD in Education – learn more