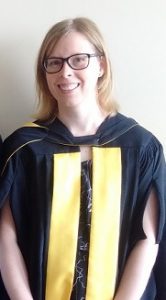 Dr. Danielle Cox, Associate Professor in the Department of Mathematics and Statistics at Mount Saint Vincent University, has been named the 2021 recipient of the Early Career Research Award. She was recognized during MSVU’s virtual spring convocation celebration held Friday, May 28, 2021. The Early Career Research Award was established to recognize a faculty member at the beginning of their career who is pursuing exciting and innovative research in their field.

A proud MSVU alum, Danielle received a Bachelor of Science with honours from Mount Saint Vincent University in 2007. She held the highest aggregate GPA in her graduating class. She subsequently completed her master’s and doctoral degrees in mathematics at Dalhousie University. Dr. Cox joined MSVU as a faculty member in 2015 and has since made significant contributions to service, teaching, and, most notably, research.

Dr. Cox studies graph theory, specifically optimal graphs, combinatorial number theory, and oriented graphs. In the fall of 2015, she was awarded an MSVU New Scholars Grant of $10,000 and in the spring of 2017, she received a five-year NSERC Discovery grant of $70,000.

Since she began at MSVU, Dr. Cox has published nine research papers and has submitted four more for publication in well-respected journals in her field. One of her nominators, Dr. Tina Harriott, Chair of MSVU’s Department of Mathematics and Statistics, noted at the time of nomination that Dr. Cox had collaborated with twenty-eight different people on published or submitted articles. Additionally, Dr. Cox is a reviewer for six journals: Networks, Discrete Mathematics, Discrete Applied Mathematics, Theoretical Computer Science, SIAM Discrete Mathematics and the Journal of Statistics Education.

Also since joining the faculty at MSVU, Dr. Cox has given 22 conference presentations, including 11 invited talks, which are typically reserved for well-established and highly respected researchers – clearly, she is recognized as both despite being early in her academic career. 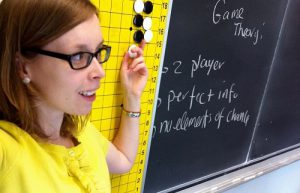 Dr. Cox’s community outreach has included the Science Circles program at MSVU and many school-based talks to encourage young Canadians to pursue studies in mathematics. She is also very active in organizing and participating in local and regional seminars in her various research areas. She is currently co-organizing the weekly (online) Atlantic Graph Theory Seminar Series.

Many students have benefited from Dr. Cox’s expertise in the field; she is a much sought-after mentor for graduate and undergraduate students alike. Dr. Cox has supervised five honours thesis students to completion, and three students pursuing directed studies, while also working with several summer students through the NSERC Undergraduate Student Research Award program. Through her adjunct position at Dalhousie University, she has co-supervised a doctoral student in Mathematics.

It is notable that Dr. Cox was also the recipient of a teaching award at MSVU for her outstanding abilities in that domain as well – in 2017, she was named the inaugural recipient of MSVU’s Alumnae Early Career Teaching Award.

Congratulations, Dr. Cox, on this latest recognition of your research excellence!