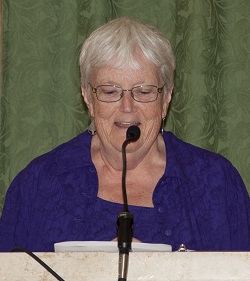 At our most recent convocation (November 2014), the Mount welcomed a new Chancellor, Sister Joan O’Keefe. Sister Joan was elected Congregational Leader of the Sisters of Charity-Halifax in July 2014 and in that role also serves as Chancellor of Mount Saint Vincent University.

Earlier this month, Sister Joan shared with the CBC what has inspired her work to date and her upcoming 50th anniversary as a Sister of Charity.
Click here to listen to Sister Joan’s interview and #get2knowthemount.
Next article »
Mount alumna encourages empathy
« Previous article
Holiday message from Dr. Ramona Lumpkin, President and Vice-Chancellor