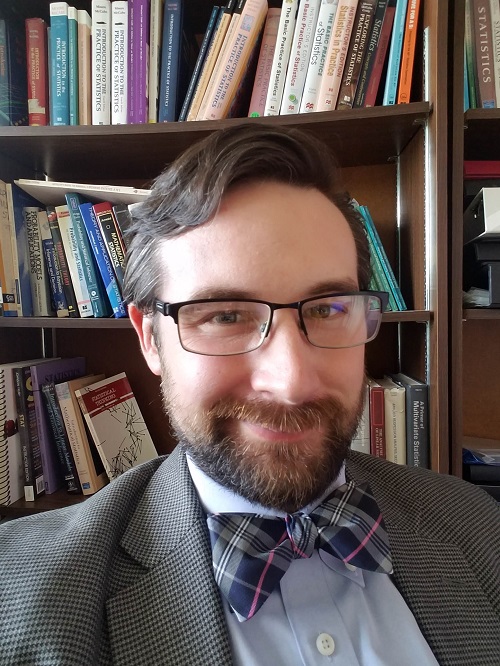 Dr. Douglas Whitaker, who recently joined the Mount’s department of Mathematics as Assistant Professor, has always liked being able to make sense of the real world, but he never set out to become a statistician. He acknowledges an upbringing that encouraged him to take risks and try new things, which ultimately led him to a career he loves.

“I’m not particularly good at mental math, but I’ve always enjoyed math and did very well in school. What I find more interesting is looking at how we demonstrate something is true – using logic and reasoning.”
In his first year at the University of Florida, Doug had planned to become an engineer, but he quickly realized after taking a physics course that this was not the path for him. Instead, he found his path after taking courses in regression analysis and non-parametric statistics. “It was the first time where we were looking at a real-world problem for which people have data to answer their questions. I realized I could combine my love for computers, math, solving real-world problems, and communication. This appealed to me.” In 2010, Doug graduated with bachelor’s degrees in mathematics and statistics and an interest in pursuing statistics further.
During graduate school, Doug taught introductory statistics courses, an experience that set him on a path to pursue his doctorate. He recalls, “In those first few statistics teaching experiences, I felt like my students were lacking some skills which they had ostensibly learned in prior courses, and I was focused at the time on trying to transmit knowledge to them with varying degrees of success. … When I met my advisor, he told me that I could research how statistics is taught, learned, and assessed, and that opened my eyes to an entirely new field.”

“I want to show students that statistics isn’t this scary, mystical thing. It is a set of tools and a discourse we use to communicate about the real world.”

As part of his dissertation, Doug examined how the best statistics teachers got to be the best. Through a series of interviews and assessment tools, he found an overarching theme – community as a response to isolation. “The successful teachers in my study were deeply connected with various communities and much of their success was attributable in some ways to the roles they assumed within these communities. These communities were usually outside of their school environment – a response to the isolation they experienced as often the only statistics teacher in a school.”
This research shed light on the importance of fostering a community of teaching and learning – an approach valued at the Mount. Doug graduated with his PhD in Statistics Education from the University of Florida in 2016.
Currently, Doug’s research is in two intersecting trajectories. The first is examining how statistics can be taught better, which involves working with teachers, identifying how students learn and how teaching models can be improved. The second is focused on developing assessments and measures.
Prior to coming to the Mount, Doug was working at the University of Wisconsin-Stout where he was helping his colleagues who were developing assessments within the pre-service education program. “Under the old assessment system, there was so much variability between students and between programs. I helped with the development and analysis of a common assessment for everyone in the education program.”
And although Doug enjoyed contributing to assessment development for the teaching and learning of statistics, he has a broad range of interests. “Regardless of the context, I am interested in helping people improve their instruments by identifying what items are working and what may not be working and why. In each new context I have the opportunity to learn more about other fields.”

“I know that my students may not necessarily become statisticians, but if I can get them to think critically on things like how graphs may be portrayed on the news then that’s something.”

From studying butterflies, orange trees, psychometrics and more, Doug loves how his career has exposed him to new areas and ways of thinking. “I love making sense of the world, and I like the ability to work with people. There’s a quote from the famous statistician John Tukey that resonates with me: “ ‘the best thing about being a statistician is that you get to play in everyone’s backyard’. I guess I like to play.”
When asked why someone should consider studying in statistics, Doug replies, “It’s because there is no shortage of data out there. Data is used by everyone and by every organization to make decisions, and statistics is a set of tools for making sense of the data. A better understanding of statistics enables better communication and making more informed decisions in our lives.”
In the classroom, Doug’s goal is to make math and statistics less intimidating. “I want people to leave my class and think of it differently than any other math course they have taken. I want to show students that statistics isn’t this scary, mystical thing. It is a set of tools and a discourse we use to communicate about the real world. I know that my students may not necessarily become statisticians, but if I can get them to think critically on things like how graphs may be portrayed on the news then that’s something.”
When Doug is not in the classroom or researching, you can find him reading, baking, traveling, or playing video games. And while the process of coming to Canada from the US has been long, to Doug it has been well worth the wait.
Next article »
“My heart is full because I get to go to university”: Meet student Kerry Bowness
« Previous article
Françoise Enguehard to receive honorary degree from the Mount