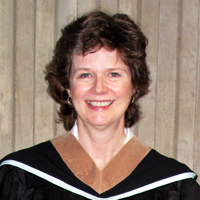 Winston Churchill once said “give us the tools and we will finish the job.” Sometimes all you need are the right tools to finish what you’ve started. One recent Mount graduate is proof of this statement.

Katharine Gillan, a native of Campbellton, New Brunswick started her education at Mount Saint Vincent University in 1969, receiving a diploma in secretarial studies while working towards an Economics-Business degree. In 2011, she graduated from the Mount with the help of courses she initially took during her studies from 1969-1971.

“I was thrilled to be attending Mount Saint Vincent in 1969 with two good friends of mine,” says Katharine. “I chose to attend the Mount initially as it came highly recommended by my friend’s sister; it wasn’t too far from my home town and was easily accessible by train.”

During the 40 year gap from her studies Katharine moved to British Columbia and built her life on the west coast, taking advantage of B.C.’s combination of hills and water by taking up skiing, hiking and sailing all while raising a family with her husband.

Also, during that time Katharine worked for the B.C. Government and Service Employees’ Union (BCGEU) and retired after 32 years of service. “Retirement didn’t agree well with me,” laughs Katharine. “So, I decided to continue my education at the Mount while doing contract work.” She currently works as an Executive Assistant for another union in B.C. 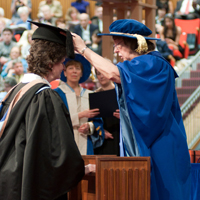 Katharine graduated this spring with her degree in Business Administration. She says finishing her degree has been a life-long desire. She took inspiration from her family and friends who were either in school or had completed their own studies. Her choice to come back to the Mount was two-fold. The Mount’s flexible distance education program let her work and live outside of Nova Scotia and offered her credits towards her degree from her previous study period.“I felt a real familiarity with the Mount because of my previous attendance,” she says. “The distance education program at the Mount is well developed and offers much assistance. I looked into schools in B.C. as well, but was much more impressed by the Mount’s program.”

“There have been many changes to the Mount since my first time here,” said Katharine. “From campus expansions and new residences to the higher percentage of male students especially in the Business program. On the other hand, I’m glad to see women still play a fundamental role in the Mount’s leadership and that there is still a strong commitment to the education of women.”

Katharine’s future plans include expanding her horizons beyond clerical work and exploring something new. She has proved that if we have the right tools we can finish the job and that learning is a life-long ambition.