Home » About MSVU » Media Centre | News » From academia to Instagram: The many performances of Dr. Will Shead

From academia to Instagram: The many performances of Dr. Will Shead

It can sometimes be a challenge for professors to keep their student audience’s attention, but one Mount Saint Vincent University professor in particular is known among students for his attention-grabbing lectures. Dr. Will Shead shares his passion for psychology through references to classic Simpsons episodes, memes, pop songs, and an infamous picture of his younger self sporting freshly frosted tips. 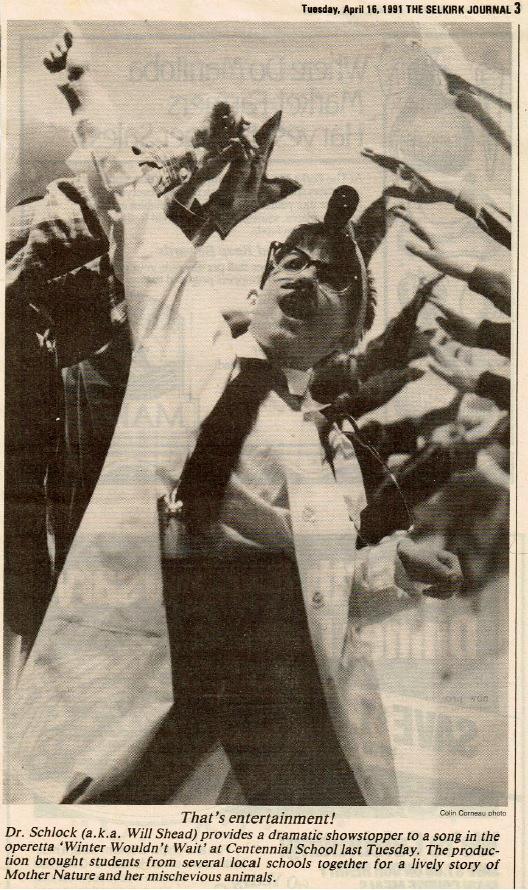 Journey to clinical psychology
Dr. Shead speculates that his journey to a PhD in clinical psychology and teaching at MSVU began, true to character, with a performance in his fifth-grade play. To set the stage: Animal psychologist Dr. Schlock (played by a young Will Shead – pictured here in this epic newspaper clipping) was being called in to help convince some rebellious teenage animals to hibernate for the winter. “My mom suggested that I should sound like Sigmund Freud, and of course I was eleven years old, so I had no idea who that was. She decided that I should affect a German accent,” he said, providing a lively demonstration. Without skipping a beat, and his eyes now wide, he followed with “Maybe that’s what sparked my interest in psychology, because ever since that moment I think my understanding was that I was gonna be a psychologist… obviously my understanding of what they do changed from there.”
Majoring in psychology for his undergrad degree at the University of Winnipeg was an easy decision. During his time there, he recalls taking a class from sport psychologist Dr. Cal Botterill – Dr. Botterill is also a former sport psychologist for NHL teams, including the 1994 Stanley Cup champions New York Rangers, who became a friend and mentor to Dr. Shead. “My dream was always to win the Stanley cup, but I was never a good enough athlete. So, I thought I would become a sport psychologist for an NHL team like Dr. Botterill,” explained Dr. Shead.
In class one day, Dr. Botterill assigned young Will a project to research gambling in sports. Never one to sit on the sidelines, Will travelled to a casino to gather some first-hand information. In the process of completing that assignment, he developed a genuine interest in gambling research. Recognizing this, Dr. Botterill encouraged Will to pursue clinical psychology, suggesting that pursuing sports psychology could still be an option later on. “So that’s the road I went down.”
Will followed his interest in gambling research all the way to the University of Calgary for graduate and doctoral studies, and then to McGill University for his two-year post-doc at the International Centre for Youth Gambling Problems and High-Risk Behaviours. Along the way, Dr. Shead became a prolific researcher and author, contributing to book chapters, authoring reports, and publishing over a dozen scientific journal articles on disordered gambling and gambling behaviour.
Recent research
Much of Dr. Shead’s recent research focuses on the tendency for delayed outcomes to be considered worth less compared to the value of immediate outcomes, and the tendency for uncertain outcomes to be valued less than certain outcomes, known as delayed discounting and probability discounting, respectively. However, there appears to be some change on the horizon for Dr. Shead.
“I think I might have burned myself out on gambling research,” he said. “Right now, I’m specifically interested in procrastination, because I’m probably the worst culprit,” he laughed. “I’d love to find out what’s behind that.” He’s also working on a novel that he’s hoping to get published. It’s about a fictionalized version of himself, played up as a bit of a teenaged fool. And it’s meant to be semi-educational, as the character goes through life and matures, learning many of the lessons of psychology the hard way. It’s a concept that might sound familiar to fans of the popular (and growing) Instagram series Psychology Quips, which Dr. Shead hosts with fellow psychology professor Dr. Derek Fisher.
Psychology Quips
“The seed of the whole Psychology Quips idea was that people aren’t going to even sit down and read a two-minute article on what cognitive dissonance is, but they’ll watch a one-minute video on Instagram,” said Dr. Shead. That one-minute Instagram format is one he’s very grateful for, adding, “I’m so glad that it’s limited to one minute, because it forces you to convey an entire idea or concept in that amount of time.”
Each episode of Psychology Quips serves as a one-minute overview for basic concepts in psychology. Dr. Shead uses the series to show his love of irreverent comedy, playing a character who always misunderstands some basic psychological concept. Then his friend and colleague at the Mount Dr. Derrek Fisher comes in to correct him. Their interactions drive most of the series’ humour.
“I like to show videos in class to demonstrate something. It’s always better to just show it,” said Dr. Shead. However, the series is quickly growing in viewership beyond the original intended audience of MSVU students. In fact, Dr. Shead and Dr. Fisher were featured in a televised interview segment on Global News in last February, as part of the channel’s efforts to celebrate psychology month.

“If I didn’t go into psychology or creative writing or something like that, I would have wanted to be a film editor. There’s so much art to the editing process that I don’t think people realize,” he said. “I don’t think I’m a particularly good performer, but I think I’m a pretty good editor.” No doubt, his students would disagree with the former.