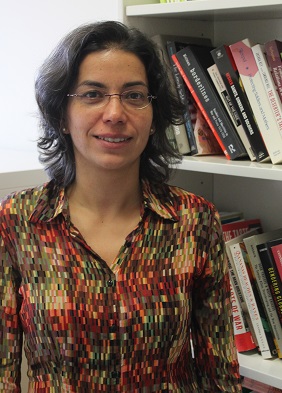 Dr. Maya Eichler grew up in Vienna, Austria, and came to Canada 15 years ago. She completed both her Master of Arts degree and PhD at York University. Her doctoral studies focused on global gender issues, women’s involvement in military reform, militarized masculinity and how gender norms play a role in the reintegration of veterans into society.
Most recently, Dr. Eichler has found a new home at the Mount, in her role as not only Assistant Professor in the Political Studies and Women’s Studies departments, but also as the newly appointed Canada Research Chair in Social Innovation and Community Engagement.

Taking research into the classroom and beyond

In her teaching, Dr. Eichler offers her students the opportunity to engage in her research passions—she helps them consider the role of women in public and privatized military and security organizations, and the implications of gender in Canada’s global military engagement and society. Having contributed two pieces to the Community Show at the MSVU Art Gallery, she also encourages her students to get actively engaged with the issues at hand in additional ways outside the classroom.
“We are having a debate, but need to have more of one, about Canada’s military involvements abroad and their social impacts at home,” said Dr. Eichler. “This especially relates to my research interests in veterans’ transition from military to civilian life, and women’s changing military roles.”
Canada’s involvement in Afghanistan was the first war in which there were no combat restrictions on women in the military, and the first time we have lost a woman soldier in combat. Dr. Eichler says that with so many changes happening, it is important that we not only study the dynamics and implications of those changes, but also engage the community and civilian society in discussion on and awareness of these events.

One of Dr. Eichler’s main focuses in the upcoming months is the establishment of a new centre on campus, known as the Centre for Social Innovation and Community Engagement in Military Affairs. This centre will become a research hub at the Mount that will unite people based on an interest in military issues writ large. Researchers from across the Mount’s departments are joining together, along with several students, to build new research collaborations and provide an institutional space where researchers, students, and the community can come together to share ideas and engage in discussions surrounding the questions of war and peace in Canada.
“The Mount is a great place to open this centre, and further research into Canadian military affairs and gender relations,” said Dr. Eichler. “The Mount has always been at the forefront of gender research and addressing national issues, and Halifax itself is the perfect place to engage on these issues, because the interest is here, and the military plays a significant role in local community and the lives of our students.”
Next article »
Family matters at the Mount
« Previous article
Story update: Mount students move into first place in global business simulation exercise