Caritas Day 2015: The Mount Gives Back 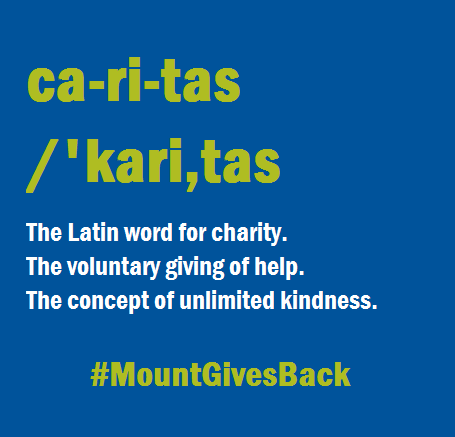 On January 28, the Mount community continued its annual tradition of Caritas Day, a day that is set aside for volunteerism and benevolence. In 1951, a fire destroyed what was then the only building on campus; since that time, the Mount has celebrated Caritas Day as a means of recognizing the generosity of the Halifax community who showed their immense support in the days and weeks following the fire. Each year on January 28, Mount students, faculty and staff are encouraged to find a way to give back to the community. This year the spirit of giving reached all the way to Calgary, Alberta.

A group of Mount Bachelor of Public Relations graduates living in Calgary came together this year to deliver thank you cards and Timbits to the staff of the Calgary YWCA, Ronald McDonald House and Alpha House (a non-profit agency that helps those affected by alcohol and drug dependencies). They also delivered thank you cards and donations such as diapers, formula and winter jackets to the Inn from the Cold, the Women’s Centre and Women in Need. Allison MacDonald, one of the participating graduates, reached out the Mount to share their efforts to inspire other alumnae to participate in Caritas Day.
“We are hoping to challenge alumnae across the country, or across the world for that matter, to join us and celebrate community, gratitude and giving back!” said Allison.

Food drives on campus and off 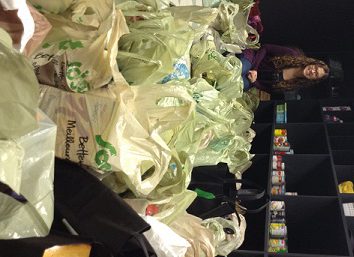 Other initiatives took place a bit closer to home. The Business and Tourism Department held their annual food drive during which more than 50 students and faculty took to the streets to collect food donations. After a successful outing, all donations were given to the Wellness Pantry, an on-campus food bank. Other students participated in “Stuff a Truck” held by the Mount’s Athletics and Recreation Department. Similarly, students and faculty toured the community collecting food donations to fill an entire truck and all donations were given to Feed Nova Scotia.

The Bound for Shamattawa Book Drive came to a close this Caritas Day with a Packing Party. Fifteen volunteers devoted their day to organizing, cataloguing and packing the 2,439 books that have been gathered since September. The collection valued upwards of $17,000 will be sent to the Abraham Beardy Memorial School in Shamattawa, Manitoba, who lost their library due to a mould issue. 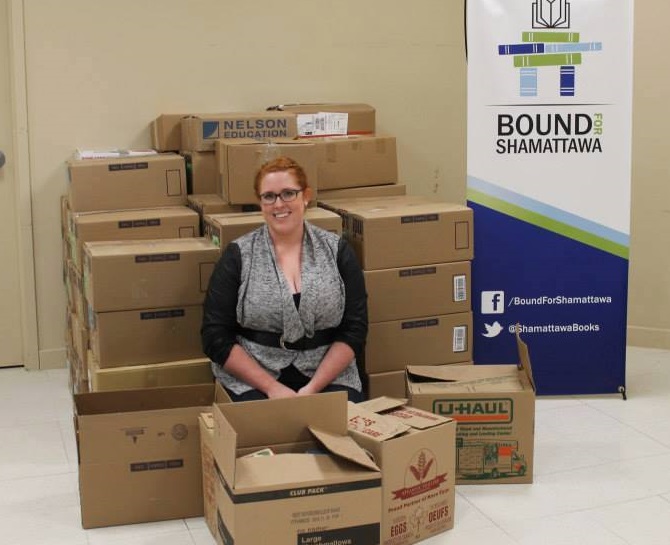 “I cannot be more proud, appreciative, or happy over the success of the Packing Party, and the spirit of Caritas I saw in my peers,” said Stacey de Molitor, fourth year Mount student and Bound for Shamattawa organizer. “It absolutely amazes me how this project has helped bring people together, and I am so proud of what we’ve accomplished.”
Many students shared their efforts through social media (#MountGivesBack) – some donated their extra clothing, others helped on-site at organizations, like Hand in Hand, which offers community-based programs. No matter where their efforts were focused, the dedication to giving back to the community is growing stronger at the Mount each year – even reaching alumni across the country.
Follow this link to more photos from Caritas Day 2015.
Next article »
The critical need to care for family and friend caregivers
« Previous article
Social Enterprise for a Day returns for fourth annual conference