Since December of last year, a group of newcomers to Canada have gathered at the University’s International Education Centre to participate in “conversation circles” designed to support their development of English language skills and help build knowledge of Canadian culture. After months of learning together, they will officially “graduate” from the first session this week.

The “Immigrant and Refugee Conversation Circles” at the Mount are the result of the effort of graduate Education student Lama Almbubark. Mount students have a way of bringing people together, and Lama is a perfect example of how the University’s diverse student population is helping transform the lives of others. The circles have become very popular over the past several months, ultimately welcoming 30 individuals with the support of 20 volunteers. 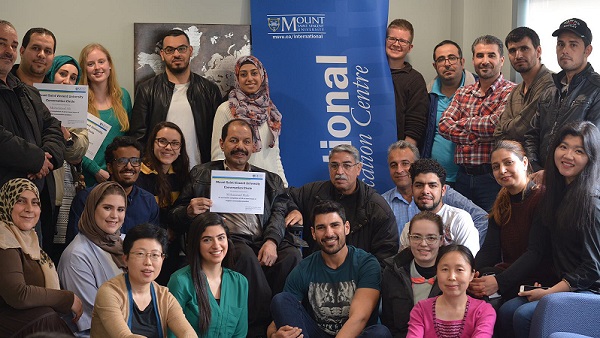 A place for adult education

Starting the conversation circles was not just an idea, “it was something I had to do,” said Lama. Lama’s graduate studies are focused on Teaching English as a Second Language (or TESL) and she’s a regular volunteer at local public schools tutoring refugee students. It was through that work that she realized that there was also a need for adult education. The parents of the students she was supporting in school were looking for help with their English conversation skills too.
So Lama set about to find a way to support all family members. Taking place each Friday within the Mount’s newly renovated International Education Centre, the circles have provided a space where newcomers to Canada can practice conversation skills through interaction with a mix of other attendees. “We focus on developing speaking and listening skills for everyday conversations using topics such as Canadian Culture, and we pick a theme of the week before every circle,” said Lama. “The goal is to have the adult learners be able to carry the conversation so they can become more independent in their daily lives and understand more about Canadian culture.”.
The circles have been most popular among Syrian refugee families, but have also included people from other countries such as China and Iran. “All of the learners share a similar situation and level of English,” said Lama. “The participants have become so engaged and I realized, this is what we want. They have also started to develop relationships with the Canadian volunteers which is great. The volunteers really enjoy what they are doing.”
Lama comments on all of the help she’s received from the volunteers, noting the support she’s received from one particular volunteer at Saint Mary’s University (SMU). “Sandra Powell, a professor at SMU in the TESL program has been with me from the beginning. She helps make it happen behind the scenes and helps with choosing the topic of conversation each week. The other volunteers who help with the circles are also very helpful; we wouldn’t be able to do it without them.”
Learning that goes both ways
Lama encourages others to get involved in the way she and her volunteer supporters have. “It’s good for Canadians to also become learners,” she said. Lama notes that when Canadians take the time to learn about other cultures, it makes the transition for newcomers easier.
“Syrians are becoming such a large part of the community and they also change the community in a positive way,” she noted. “If we understand their culture more, it will in turn help our community become stronger and a big part of this goes back into education. That’s why I’m happy the Mount is involved. Most of these people have university degrees, but learning a new language and culture is the hardest part.”
Nicolle Bowes Cashen, Manager of International Student Services and English as an Additional Language Programs at the Mount, has been with the circles since they started. “The program is helping everyone, both the learners and volunteers,” she said. “Fridays are now very busy at the International Education Centre and we think that the engagement is just beautiful. People have been bussing from all over Halifax to attend the circles, some with their children alongside them while they learn. The International Education Centre at the Mount is proud to host a learning opportunity for refugees and immigrants and encourages others to help our new community members in any way you can.”
Next article »
The Mount and Halifax Chamber of Commerce enter new agreement creating special student opportunity
« Previous article
Supporting NS government in addressing waitlist for psychological educational assessments