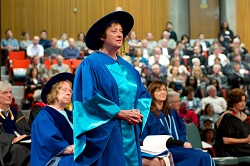 “Life is 10% what happens to me and 90% how I react to it,” said Kempston Darkes, highlighting the importance of personal values as students face new challenges. She stressed the value of personal character over detailed career planning, reflecting her own journey to becoming Group Vice-President, and President Latin America, Africa and the Middle East, General Motors Corporation. “Be open to possibilities and be optimistic. Don’t over-plan your career.” 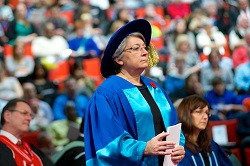 For Simon, the honour was a culmination of a life spent advocating for education and social justice for Inuit and other Indigenous people. “I dream of the day when young Inuit in Canada’s Arctic will fill a room like this, heading out on a journey of promise,” said Simon. As past President of Inuit Tapiriit Kanatami, the Makivik Corporation, and the Inuit Circumpolar Conference, Simon encouraged graduates to stay strong as they work to create positive change in the world. “The values of integrity, honesty, determination and working through adversity served me well.”

The Mount also recognized Professor Brent King with the title of Professor Emeritus for his 26 years of contributions through the Department of Communications Studies, formerly the Department of Public Relations. “As a highly effective teacher, Professor King has made a significant impact on several generations of public relations students,” said Dr. Ramona Lumpkin, President and Vice-Chancellor at the Mount. “His generosity of spirit has enhanced our work environment, nurtured our students, and made our university stronger as a result.”