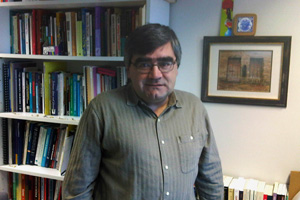 In the office of Dr. Fernando Nunes, Assistant Professor in the Department of Child and Youth Study, hangs a framed photo of two old and weatherbeaten wooden doors.

At first glance, the photo appears to be a piece of art, but these doors have significant meaning in a lifetime of research and community advocacy.

The doors belonged to a small home in a village in the impoverished, rural northeast of Portugal, owned by Fernando’s grandparents. He fondly recalls spending months at a time in this home surrounded by dozens of aunts, uncles, grandparents and cousins. “It was like being at a summer camp all the time – with your entire family,” he says.

Just after turning eight years old, however, Fernando and his immediate family left behind his large family to come to Canada. As an only child, with only his parents by his side and facing a number of immigration challenges, Fernando describes adapting to life in Canada as ‘less than easy.’

From these challenges grew a desire to make a difference, and so for the past number of decades, Fernando has been working to help new Canadians like his own family better adjust to life in Canada.

His first book, titled Programs and Adjustments of the Portuguese Immigrant Family in Canada, was published while pursuing his undergraduate degree in ecology at York University in Toronto. The monograph, which was published in Portugal, began getting attention by faculty in the Multicultural History Society of Ontario, which was headed by faculty from the University of Toronto. Fernando was convinced by the Director of this Centre to abandon the sciences and pursue a Masters in Applied Psychology in Education, focusing on Immigration and Minority Integration.

Fernando is also one of the first in Canada to publish research on Portuguese women who have immigrated to Canada. “I noticed a gap in research when it came to Portuguese-Canadian immigrants, and it’s an extremely important topic,” he says. “I began to research it and noticed other scholars were referencing my first article on this issue – I’ve continued to address the topic ever since.” He has since published in both Portuguese and English, in Canada, Portugal and Brazil.

Since his arrival at the Mount in 2004, Fernando has worked hard to give students an inside look at the integration of immigrant children and their families. “As Canada’s diverse population grows, students in the Child and Youth Study program will increasingly be serving immigrants and their families,” he says. “I believe my personal experience and research can shed light onto what new Canadians are going through.”

Fernando is currently working with three Mount graduate research assistants and a fourth at the Université de Sherbrooke, a practice he enjoys. He has also recently completed an article with a third, at McMaster University. “The collaboration with students is excellent. I’ve worked with 10 students in my time here at the Mount, and have had a fantastic experience.”

His other current research activities focus on minority academic underachievement, the civic and political participation of Portuguese-Canadian youth and evaluating the effectiveness of Canada’s model of immigration settlement services. His most recent project, funded by the Social Sciences and Humanities Research Council, is examining the barriers and support mechanisms to the education of Luso-Canadian youth, in five cities across Canada.

As the simple photo of the wooden doors hangs quietly in his colourful office, Fernando’s computer begins to beep. He explains that it is one of his research partners in Portugal calling him on Skype. The entire Mount community is proud of the work and research being done by Dr. Fernando Nunes. He’s a big thinker who’s fostering a diverse, unique learning environment for Mount students. His balanced mix of personal experience and academic passion go a long way.

Next article »
Caritas Day Highlights
« Previous article
Caritas Day offers opportunity to get involved, give back