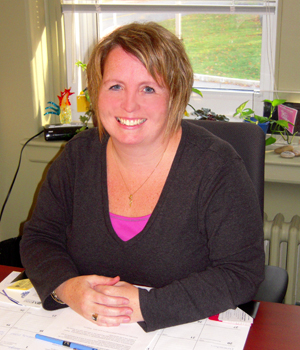 Stephanie Hale of Westville, Nova Scotia, will soon become a graduate of the Mount’s Master of Education program. But Stephanie has been a member of the Mount community for much longer than a degree warrants – she began working as a student in the Registrar’s Office in 1993 and has never left.

The Mount’s strong sense of community seemed to be exactly where Stephanie wanted to be. After graduating with a Diploma in Office Administration from the Mount in 1994, Stephanie admits she never intended on reclaiming her student status. “I said I would never step back into the classroom. One of my colleagues said ‘never say never’,” she laughs. “I guess she was right.”

Less than a decade later, Stephanie graduated with a bachelor degree in Office Administration from the Mount and has since established herself as a valued member of the university community and Assistant Registrar.

Fueled with passion and an eagerness to learn, Stephanie’s attitude has always been the driving force behind her accomplishments. When asked how she managed to balance school and work, she laughs, “Some days I don’t know. It can be long hours, but I love it and have been passionate about both for a long time so it doesn’t really seem like work.”

When it comes education, Stephanie notes lifelong learning is something her parents instilled in both her and her brother as they were growing up.“I believe in learning, and I believe we can all learn something new every day.” With that motto in mind, it’s understandable why Stephanie chose to focus her most recent degree on Studies in Lifelong Learning.

More than a dedicated student and employee, Stephanie has a long history of volunteerism. She has previously been involved with the Pictou County Relay for Life, and is currently volunteering with the Canadian Breast Cancer Foundation’s Run for the Cure. “Breast cancer affects my family,” Stephanie says. “It’s important I stay involved against the fight.”

When asked why she gives back, Stephanie notes, “We have such a strong sense of community at the Mount. You can’t help but want to get involved. When you find something you’re passionate about, you’ll always make time for it. Giving back is something I’ve always found personally rewarding.”

Stephanie’s approach to life, work and school has resulted in a collection of credentials and experiences which she says are invaluable to her future plans. “One never knows what may happen tomorrow,” she says. “But for right now, I’m comfortable and fulfilled with where I am – at home, with the Mount.”