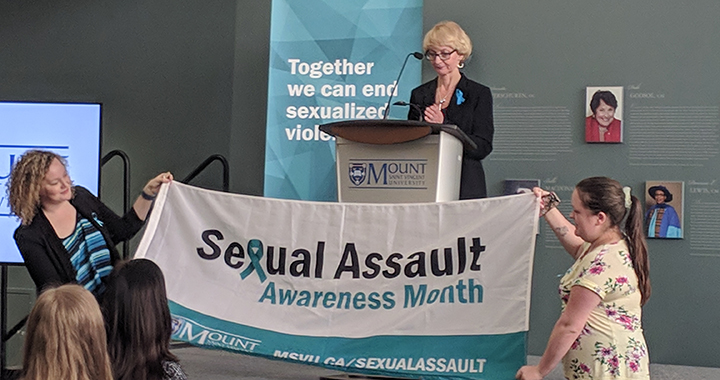 The Mount Saint Vincent University community marked the beginning of Sexual Assault Awareness Month (April) with an event held yesterday in the McCain Centre Atrium. The event focused on the devastating impacts of sexual assault, and the measures we can all take to stop violence and support survivors. The University’s revised Policy Against Sexual Assault was also introduced.

In her opening remarks, Dr. Mary Bluechardt, President and Vice-Chancellor of the Mount, highlighted the work of the University’s Sexual Violence Prevention Committee.

“The Mount established a Sexual Violence Prevention Committee a little over a year ago to enhance the University’s work on the prevention of, and response to, sexualized violence,” said Dr. Bluechardt. “The committee reports directly to me and includes students, faculty, staff, and a community representative from the Avalon Sexual Assault Centre. I’m sincerely grateful for the work of this committee and I thank them for their dedication to this important topic.”

The Committee, which is responsible for policy development, as well as education, training and awareness, created a video last year titled Time to Act: 5 Ways to End Sexualized Violence. The video was played at the event, and featured the following actions each of us can take:

Dr. Bluechardt also unveiled a new Sexual Assault Awareness Month flag that will fly on the flag pole attached to the front of Seton Academic Centre.

“This is the first year a Sexual Assault Awareness Month flag will fly on the Mount campus as a reminder to all who see it that sexual violence remains a significant issue in our society,” said Dr. Bluechardt. “It will also serve as a symbol of the Mount’s commitment to sexual violence prevention.”

Paula Barry, Associate Vice-President of Student Experience at the Mount, and Chair of the Sexual Violence Prevention Committee, provided an outline of the Mount’s updated Policy Against Sexual Assault. The University first launched its policy in 2015. Over the past year, it was revised in collaboration with students, faculty, staff, and subject matter experts on campus and in the broader community, and was recently approved by the Mount’s Board of Governors.

“Our goal with this updated policy is to increase the level of confidence members of the Mount community have in the University to come forward with either a disclosure or formal report of sexual assault,” said Barry. “Our revised policy is trauma-informed and survivor-centred, and incorporates the invaluable feedback received from students, faculty, staff and student groups across the country.”

A new video created by the Sexual Violence Prevention Committee spotlights the top three things the Mount community should know about the policy:
• Supporting victims/survivors is the Mount’s priority
• There is a difference between “Disclosing” and “Reporting” a sexual assault
• The victim/survivor is in control
Watch the full video »

Student Madeline Mitchell, a member of the Mount Saint Vincent University Students’ Union, as well as the Sexual Violence Prevention Committee, also spoke at the event. She pointed to the need for more, and enhanced, consent education at all levels of education, and for society in general.

“We teach young women to be careful about what they are wearing, how much they are drinking, to walk in well-lit areas and carry whistles and tools for self-defense,” said Mitchell. “We teach all this when we should simply be teaching – do not assault people.”
A policy guide booklet, which provides a high-level overview of the formal Policy Against Sexual Assault, has been created as a tool for students, faculty and staff who may receive sexual assault disclosures.
For more information on the Mount’s sexual violence prevention initiatives, and the University’s response to sexual assault, please visit msvu.ca/sexualassault. You can also view a video recording of the event on the Mount’s YouTube channel.
Next article »
MSVU Alzheimer’s disease researcher receives new federal funding
« Previous article
Thinking outside the plate: Meet a pair of unlikely collaborators turned emerging entrepreneurs