Student athlete and scholar achieving goals on and off the field 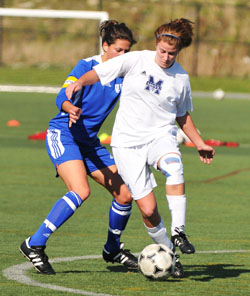 In 2008, Emily Burke was the captain of her high school soccer team in New Waterford, a small town in Cape Breton. She was an esteemed student, president of the student council, a member of the high school band and an active member in her youth church group. Naturally, she wanted to keep her options open when it came to applying to universities – knowing only that she was ready to leave her hometown.

Aware that Emily was on a hunt for the right school, her soccer coach suggested that she may want to give the Mount some consideration – his own alma mater. Its small size would make the transition from high school a bit easier, and the athletics department was fantastic. She took her coach’s advice and applied to the Bachelor of Science program at the Mount.

After receiving her exceptional application, the Mount approached Emily explaining that she was a qualified candidate for the Presidential Scholarship. She was surprised at this initiative.

“I didn’t receive any kind of treatment like this from any other universities so I instantly had a good feeling about this school. Everyone always said that you were regarded as a number and not a person once you entered university, but I felt like if these people took the time to find me and helped me get this award, they must be pretty genuine.” 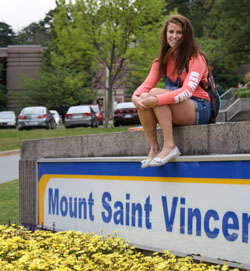 Emily applied for that scholarship, and got it.

In September of 2009, Emily embarked on her new adventure. She chose to live in Assisi, the Mount’s largest residence, where she met new friends, some from Nova Scotia, some from Kuwait, Tanzania and the Bahamas. The cafeteria, the science labs, and Vinnie’s Pub became her second home.

Although the workload was something she had to get used to, a typical experience for a first year student, it was rewarding. “It was definitely more of a workload than what I was used to in high school. I always had to work hard, but the Mount made things comfortable for me. I always felt like I had support.”

All the while, Emily was also excelling on the field. She stood out at women’s soccer tryouts and was a perfect fit for the team. She traveled to Toronto with her teammates in her second season to the CCAA National Championships. The following season, she was appointed to be co-captain of the team to ‘learn the ropes for next year’.

When it was time to name the team captain this past season – Emily’s final season – it was no surprise when her name was called. 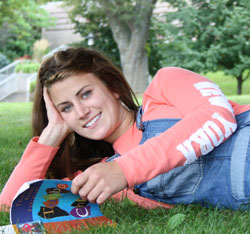 Her hard work off the field has also paid off – literally. Every year, Emily has maintained a high enough GPA to renew her scholarship, adding up to $36,000. Aside from her academic and athletic successes, Emily notes another success – perhaps the most important. “I have met the most amazing friends at the Mount. There is a guy on the men’s soccer team this year from Saudi Arabia that refers me to as ‘sis’ because he says that he considers a number of us like family. It’s this sense of family that I’ve come to love so much.”

It is almost surreal for her to believe what she has accomplished to date. “I applied for the scholarship, and got it. I tried out for the soccer team, and now I’m the captain. I’m almost done my undergrad degree, and I plan to go to dental school. Who would have known this is where I’d be.”

The Mount is honoured to have been a part of Emily’s inaugural chapter, and looks forward to seeing what big things this Mount alumna will be up to in the years to come. 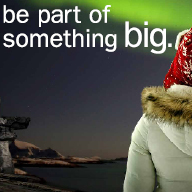 Hear more from students at msvu.ca/ourstories