Valedictorian Alison Bryan (BPR ’19) believes in turning every experience into an opportunity, and has successfully applied that philosophy to her time at Mount Saint Vincent University.

From the time she was a high school student in Bridgewater, Nova Scotia, Alison has known she wanted to pursue public relations.

“I’m someone who likes to keep moving and do different things,” she says. “What interests me most about public relations are all the different facets and directions it can take. You could be doing internal communications for government, or event management for an agency or corporation, or you could be doing crisis communications. That really entices me.”

Alison says MSVU’s four-year bachelor’s degree in public relations with co-operative education opportunities was exactly what she wanted. She was also attracted to the sense of community offered by the university’s small size.

“I felt that I wouldn’t just be a number, that my professors would know my name,” she says.

Alison says she arrived on campus with a university bucket list; things she hoped to accomplish over the next four years.

“The first week, I had just a few things on my list: make a couple of friends, see if I like my classes, and meet my professors. But after the first week, I added about 10 different things and started checking them off,” she says. “Over time, my list would get shorter as I checked things off, and then it would get bigger as opportunities presented themselves and I would think, ‘Oh I really want to do this and this and this!’”

In her first year, she worked on the #LoveisLove campaign which had been launched at MSVU in 2013 by a group of students looking to create a more positive and inclusive campus culture for the 2SLGBTQIA+ community. It has since evolved into the non-profit #LoveisLove Equality Association with activities in more than 15 universities across Canada. 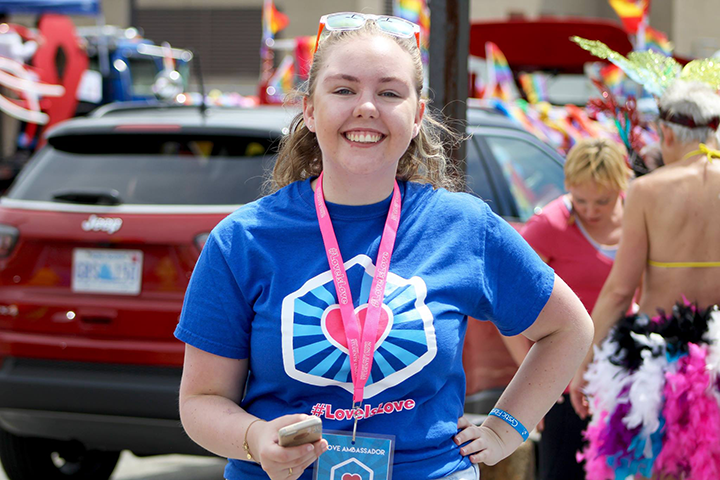 “I started as a participant, then moved into an ambassador role helping run the campaign, and then finally I became the campaign organizer, doing multiple events throughout the year. I also sat on the association’s board for about a year and a half.”

Alison also worked as an ambassador for local WE Day student empowerment events, and, for more than two years, as an MSVU student ambassador giving campus tours to potential students. She also became a mentor and then program assistant with the Mount 101 program, out of the Centre for Academic Advising and Student Success, and in many activities related to athletics and recreation, and residence life.

In her third year, Alison completed her first two work terms as Vice-President of Student Life for the MSVU Students’ Union. She says the position gave her a wide array of opportunities for learning and growth. She was the student representative on the university’s academic appeals, student judicial and student discipline committees. She also sat on the MSVU Senate Student Experience committee, as well as the orientation, convocation and alumni committees.

During her time with the Students’ Union, Alison attended the national conference of the Canadian Organization of Campus Activities (COCA). The following year, when the conference came east, Alison was asked to step in and assume a leadership role as eastern director, awards banquet chair and as an education session presenter.

Alison’s final work term took her off campus, working for the federal government at Service Canada.

“Going into government was a completely different atmosphere and environment, but I adjusted to it well and it was a very good experience.”

“It was phenomenal!” she says. “It was the best experience I could have had to end off my degree. You learn a lot about yourself when you’re immersed in a completely different culture and education system. I discovered myself more, and I made connections in my field from all over the world.”

Somehow in her packed schedule, Alison found time to share her expertise in artistic swimming (formerly called synchronized swimming). She had been involved as an athlete in Bridgewater before becoming a coach for recreational and competitive programs.

“In my second year, I started coaching a team here and haven’t really stopped!”

She’s currently the marketing chair for the provincial artistic swimming board.

Alison says her MSVU experience has been everything she hoped it would be – and more.

“I have checked off everything on my bucket list,” she says. “It’s amazing being in a community where you can sit and make friends with anyone on campus whether you are in the sciences, the arts or a professional studies program. And I have experienced nothing but the best, from staff, faculty and other students.”

When asked for her best piece of advice for incoming students, Alison doesn’t hesitate:

“Get involved and stay involved because once you’re involved and build connections, you need to maintain them so you can continue to grow, because you never know who could present your next big opportunity.”

Alison is currently working full-time in the fitness industry, coaching part-time, and is looking forward to finding a rewarding position in her chosen field of public relations and communications.

Alison will deliver her valedictory address during the morning convocation ceremony on Sunday, Nov. 3, 2019, which gets underway at 10 a.m. [Watch the ceremony live online]