Powerful partnerships between Halifax universities and researchers have spurred a world-leading breakthrough in Alzheimer’s research. Researchers Dr. Ian Pottie of Mount Saint Vincent University and Dr. Sultan Darvesh of Dalhousie University describe their innovation as something that has “never been done before. Never,” and holds the potential to completely transform the diagnosis and treatment of Alzheimer’s disease. With development and preliminary testing now complete, the research team recently shared their groundbreaking results with the world, publishing their study in the Journal of Nuclear Medicine – “the highest impact journal for the field,” noted Dr. Pottie. The print edition was released on February 1, 2016.

Through extensive collaboration and determination, Drs. Pottie and Darvesh, together with several other Halifax-based researchers, have developed a new type of diagnostic agent that it is hoped will advance the fight against Alzheimer’s disease. Dr. Ian Pottie, Professor of Chemistry and Physics at the Mount, has been working with Dr. Sultan Darvesh for 10 years on this project. Dozens of undergraduate and graduate science students at the two universities have contributed to the project over the years. Alzheimer’s disease, the most common form of dementia, affects millions of people worldwide. A major obstacle in treating the disease is not having an accurate early diagnosis. As the doctors explain it, “A definitive diagnosis of Alzheimer’s is not yet possible during life.” Up until now, only brain autopsies have been able to confirm a patient’s Alzheimer’s disease diagnosis. New research, though, shows promise for a non-invasive diagnosis while patients are still alive – and treatable. As Dr. Darvesh puts it: “We have a solution.” 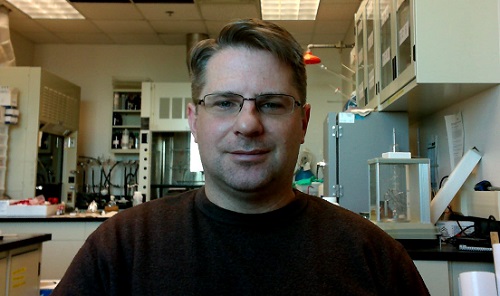 In a lab at Mount Saint Vincent University, Dr. Ian Pottie has been helping build and fine-tune a compound to detect Alzheimer’s within living patients. “The Mount lab is home to the synthesis, characterization and biochemical investigations of this puzzle,” explained Dr. Pottie. Then at Dalhousie, the compounds are put to the test. The key is a small radioactive molecule, synthesized to bind to a protein associated with the pathological structures within Alzheimer-stricken brains. “It has taken a huge amount of effort to do this,” said Dr. Darvesh. The team has put countless hours into testing hundreds of compound variations. The breakthrough? It works. In early December 2015, a new battery of tests showed the compound tested clearly binding to the protein target in diseased brains. These results were a sign that this research is headed in the right direction.

Towards clinical trials and beyond

The next step will be refining the compound for human use. “We are now focusing our efforts towards clinical trials,” said Dr. Pottie. “This is a major breakthrough in the lab,” added Dr. Darvesh. “We could have given up five years ago for many, many, many reasons. The motto in our lab is ‘Failure is not an option’, as quoted in the movie Apollo 13.” In addition to the work on diagnostic compounds, the research team has been busy securing the much needed funds to support their efforts. To date, this work has been supported by grants from the Canadian Institutes of Health Research, the Canada Foundation for Innovation, the Natural Sciences and Engineering Research Council, the Nova Scotia Research and Innovation Trust, the Dalhousie Medical Research Foundation, and the Mount committee on Research and Publication. The research has the potential to save lives – but it’s expensive. A single test of each radioactive compound costs upwards of $1,000, and many tests will be needed to refine agents for human imaging analysis. The good news is that they are closer than ever before. Drs. Pottie and Darvesh described their current compound as the “economy sedan” version. What they are aiming for now is the “formula one” version. Throughout the research process, the doctors rely on undergraduate students to help. “Students have played a very important role in this work,” said Dr. Pottie. “Students have been propelling this research for years, through summer and co-op work placements, honours theses, and classroom work.” With the research done by the Halifax team, Alzheimer’s patients may soon benefit from better diagnoses and improved treatment. As Dr. Darvesh says, “Patients are the ones who drive everything we do.” And the name of the life-changing agent, once released? In the words of Dr. Darvesh: “We plan on naming it the Halifax compound.”

Next article »
Lead NASA engineer Dr. Renee Horton to speak at the Mount
« Previous article
10 things we learned at TEDxMSVU 2016