#GirlPower in action: Humanitarian moonlighting in the Red Chamber

We’re pleased to share this piece on Senator Wanda Thomas Bernard, which was written by Mount Public Relations student Chelsea Tucker. Like many, Chelsea has found inspiration in the well-respected Mount alumna. 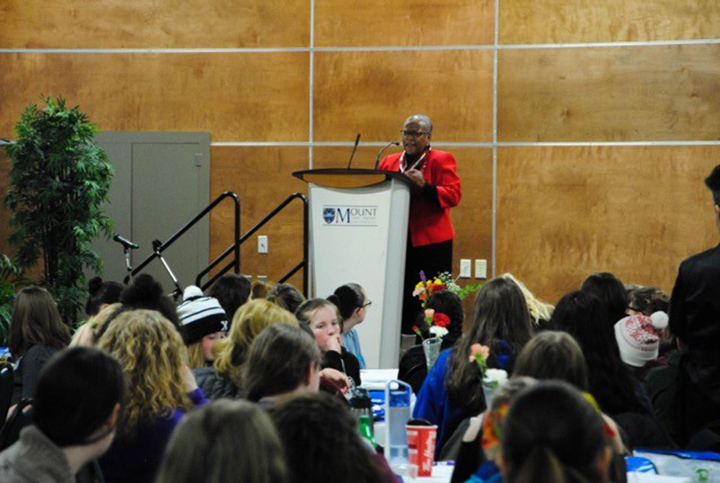 As young girls, we grow up wanting to change the world. As we become young women, society often convinces us that’s not possible. The MSVU Girls Conference was founded by the Alexa McDonough Institute for Women, Gender and Social Justice to eliminate that very thinking, and arm the next generation of women with tools to become leaders in their communities.

This year, girls from grades 7-12 were inspired by more than 40 professionals, educators and female leaders in various fields. Senator Wanda Thomas Bernard was one of the many inspirational speakers. A special Mount Saint Vincent University alumna, Senator Thomas Bernard is a living example of Nelson Mandela’s declaration, “It always seems impossible until it is done.”
Humble beyond belief, the Senator exemplifies a quiet strength that is both motivational and awe-inspiring. “I am a social worker who just happens to be a senator,” Thomas Bernard proclaims.
Having begun her educational journey at the Mount in the Academy at the age of 15, the Senator returned to impart the wisdom she has gained. “Education is really one of the tools for our empowerment. It’s one of the tools to help us find our voice and help us find ways to use our voice. That’s what my Mount Saint Vincent education gave to me, it gave me a foundation to move from, to build on,” Thomas Bernard explains.
From that solid foundation, Senator Thomas Bernard continued to add to her tool box with a degree in psychology and sociology, and continued with graduate studies in social work. Her view on utilizing education to take action shaped her decision to choose this line of work.“The education wasn’t just educating for self, it was really what do you do with that education, and social work became a really good platform.”
Adversity is something Senator Thomas Bernard is no stranger to. A first in many, she has been a professor at Dalhousie School of Social Work since 1990, and the first African Nova Scotian to hold a tenure track position at Dalhousie University and to be promoted to full professor. After breaking the glass ceiling locally, the Senator continued to the nation’s capital and was the first African Nova Scotian woman appointed to the Senate in 2016.
“Whatever bills we’re studying, whatever legislation is moving through, whatever studies that we’re doing, I always try to bring that social justice lens, and I try to do it from the position of intersectionality,” Senator Thomas Bernard reveals. A natural humanitarian, her views on social justice are a point of pride that she boasts in the red chamber.
“Senators are supposed to be representing the under-represented. It’s very empowering to be able to do that from the Senate,” Thomas Bernard shares. Although, as a member of a marginalized group herself, she recognizes the power these groups have within themselves: “Now I believe the under-represented can speak for themselves, and I happen to be from one of those under-represented groups.”
While the Senator has many letters after her name, and has received numerous awards and recognition – including the Order of Nova Scotia and the Order of Canada – that is not what makes her an admirable role model. She has managed to have a notable impact on her community and those around her, and also, to inspire others to take action. This rings particularly true for marginalized groups, including women and African Nova Scotians.
Her advice to our young women – our future community leaders – is this, “In looking at planning your career, don’t think so much what do I want to be, but focus more on ‘What do I want to do?’, ‘What do I want to contribute?’, ‘How do I want to make my mark on this community and this society?’. Then say, from what place can I do that.”
Senator Wanda Thomas Bernard is the woman we all aspired to become as young girls. Having strong female role models exemplifying that restrictions can be broken is key to raising strong, young women. Women who are proud of their diversity and their individuality are those who will change our communities and shape the next generation.
Let us continue to celebrate the Wanda Thomas Bernard’s of the world – past, present, and future. To quote an unknown author, “Here’s to strong women. May we know them. May we be them. May we raise them.”
Next article »
An unusual path to the Mount
« Previous article
Marking International Women’s Day