One of the most enriching components of the Mount is our global community. 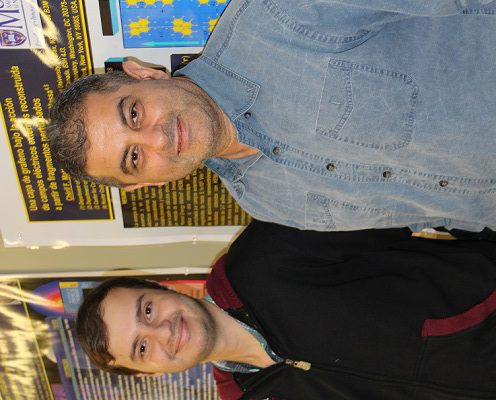 Our students, faculty, staff, and alumnae have connections all over the world, and we are proud of their experiences both before and beyond the Mount. Ciência Sem Fronterias (Science Without Borders) is a Brazil-based organization that also recognizes the value of global experiences and learning, and it is through their program that the Mount welcomes Luiz Alberto Terrabuio.

Hailing from the University of São Paulo, the largest university in Latin America, Luiz has come to the Mount to complete a year of his PhD, specializing in Theoretical Chemistry. “Science Without Borders is a big and efficient program from Brazil that gives its top students in various areas of study the opportunity to study abroad at the best centres with the most notable researchers in the world,” Luiz explains. Luiz (pictured at left in this photo) submitted a project proposal to Science Without Borders in collaboration with the Mount’s Dr. Cherif Matta, Chair and Professor of Chemistry and Physics (at right in this photo).

“The project was accepted in its entirety based on my and Cherif’s resumes, and Mount Saint Vincent University’s strong reputation,” Luiz notes.

“The program is allowing me to get to know a different country with different customs, and to work with one of the best professionals in my area of research.” Luiz and Dr. Matta are interested in quantum mechanical calculations and how they can be used to understand and solve physical, chemical, and biological questions. The focus of their work together is applying quantum mechanical calculations specifically to the mitochondria membrane. “Mitochondria is a cell organelle that is bound by two phospholipid bilayer membranes, that is, a mitochondrion is literally a bag inside a bag. The space between the two membranes contains a much higher proton concentration than in the innermost compartment which generates very intense electrical fields across the inner membrane,” Cherif explains. 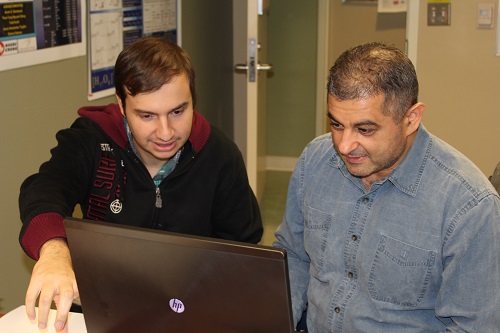 “The inner membrane is one of the most important components—this is where the energy derived from foodstuff eventually is harnessed in biology’s universal energy currency, namely, a molecule called ATP. Without the mitochondrion and its inner membrane lives of eukaryotic cells (as human cells are) cannot be maintained. Luiz is modeling the biochemistry happening inside this membrane under the effect of the electrical field theoretically on powerful computers. We hope to understand the effect of this electrical field on the biochemistry of the so-called electron transport chain that is central to the living process.” Luiz and Dr. Matta have been working together at the Mount since May 2015, and will continue to do so until the end of April 2016. They have already submitted a manuscript for publication and are finalizing a second at the time of writing. “The Mount is an optimal environment to study and learn in all areas of knowledge. Canada is a country formed by immigrants, and it is great to walk around campus and listen to several different languages; the community as well as the university staff received me in the warmest way possible,” Luiz adds.“Canada is a beautiful country and is the cradle of Theoretical Chemistry around the world. Mount Saint Vincent University is a perfect place for those who want to improve the knowledge in this area, and Cherif is one of the most eminent researchers – it is a pleasure and honour to work with him.” —