The documentary He named me Malala premiered this month, telling the story of Malala Yousafzai. This is the story of how Amanda Sutherland, a Master of Education student at the Mount, got to meet Malala, and how that meeting has changed the course of her life. While attending a workshop in Massachusetts, Amanda Sutherland noticed a woman looking for a place to eat her lunch. With no room at Amanda’s table, she decided to join the woman who sat down alone elsewhere. It was an ordinary moment, but one that would forever change the course of Amanda’s life. “Somehow I ended up talking to this woman about my life, which included how I became blind in one eye and how that childhood trauma led to my current thesis work on Multiple Intelligence and Adversity and Resilience,” says Amanda (pictured below with Malala Yousafzai), who holds an undergraduate degree in Child and Youth Studies from the Mount as well as an MA in Conflict Resolution from University of Bradford, England. “The next thing I know, she’s offering to put me in touch with Malala for a meeting during my upcoming trip to England.” 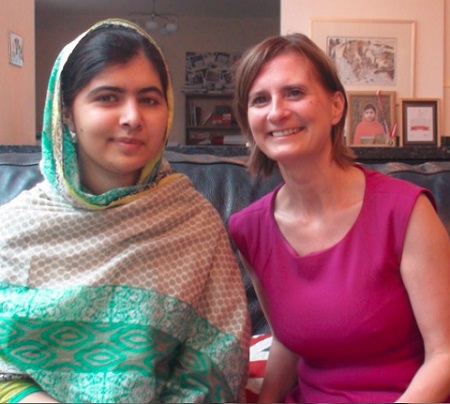 Malala, of course, is Malala Yousafzai, the global advocate for girls who are being denied a formal education due to social, economic, legal and political factors. Malala made international news when she was shot by the Taliban as a result of her activism on October 9, 2012 in her home country of Pakistan. She would later start the Malala Fund and in 2014 was awarded the Nobel Peace Prize. On October 2, He Named Me Malala, the documentary of her journey, hit theatres. Amanda describes the connection she feels with Malala as one that links two individuals through their shared experience of childhood trauma. At age 19 months, Amanda sustained an eye injury, allegedly at the hands of her mother. She was placed in foster care where she would remain throughout childhood and adolescence. “Growing up in foster care was not easy,” she explains. “I faced many barriers and challenges, struggling to understand the past and complete my education as I bounced from foster home to foster home.” “Like Malala, I have a demonstrated commitment to the education of young people to reach their potential, especially those facing barriers and difficult circumstances.”Similarly to Malala, the adversity Amanda faced as a child and young adult pushed her to help others who were following in the same path. After completing her post-secondary education, she donated $500 to the Nova Scotia Council for the Family “to help another foster child ease the financial and emotional burden of leaving a child welfare system that offers no aftercare supports to children who have permanently lived in the government’s care.” This selfless and significant act of kindness led to a bursary from the Council being named after Amanda, called Amanda’s Gift. The woman Amanda spoke to at the workshop in Massachusetts immediately saw the parallels and wrote a letter that connected Malala’s father to Amanda and encouraged the two to meet when Amanda arrived in England to take a course in Canterbury. After months of back-and-forth with Malala’s father, Amanda found herself sitting on a couch in Malala’s living room. “She walked into the room and it was just like seeing an angel,” says Amanda. “I began to cry the moment I saw her. I do not usually cry when I meet people, but something about her struck a deep chord.” The two women spoke about their backgrounds and how they have found strength in adversity. “Malala told me her new birthday was October 9th—the day she was shot,” says Amanda. “To her it represents the day her conviction was born.” “Once I finish my degree I hope to work overseas developing educational curriculum and training teachers. I have worked at an elementary school in rural Zimbabwe and volunteered on international projects in Vietnam with Agent Orange victims, and at a girl’s school in Afghanistan.” The meeting has provided Amanda with a reinvigorated sense of enthusiasm about how she can make a difference in the future – which includes a long-term goal of developing an interactive museum. “I want to design and develop a multiple intelligence museum co-created by young people on the topic of adversity using the inspirational stories of Malala and others who have transformed their adversity.” As Amanda moves forward with this mission, she hopes to keep in touch with Malala, which will include a formal invitation to Nova Scotia. He Named Me Malala is now playing at the Scotiabank Theatre in Halifax.