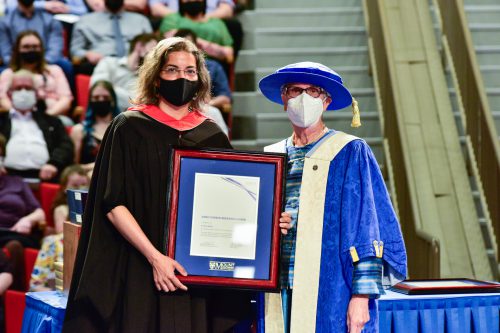 Dr. Maya Eichler has been named the 2022 recipient of the Early Career Research Award. She was recognized during MSVU’s spring convocation celebrations held May 19 and 20, 2022. The Early Career Research Award was established to recognize a faculty member at the beginning of their career who is pursuing exciting and innovative research in their field.

Dr. Eichler is an Associate Professor in the Departments of Political Studies and Women’s Studies. She began her Tier II Canada Research Chair in Social Innovation and Community Engagement at Mount Saint Vincent University in 2014. At the time, she was awarded funding from the Canada Foundation for Innovation to establish the Centre for Social Innovation and Community Engagement in Military Affairs. The Centre conducts research on gender and the armed forces, military-to-civilian transition, defence policy, and community stories of war and peace.

Dr. Eichler’s expertise in social change and citizen engagement in the military and security spheres, with a particular emphasis on the role of gender, has addressed issues of national concern and influenced public policy, especially during the recent 2021 military sexual misconduct crisis.

Since coming to MSVU, Dr. Eichler has received more than a dozen external grants and contracts  that have supported her pioneering work to establish a sex and gender lens in defence research and amplify the voices of women in the military, veteran, and defence sector.

Dr. Eichler has led many initiatives advancing feminist research on veteran and military issues in Canada and internationally, built linkages across universities and with the local community, and collaborated with national and international researchers, veteran advocates, and government departments. She co-publishes not only with academic colleagues but also with veterans’ advocates and with government researchers. She is also highly engaged in supporting emerging scholars and trainees.

Dr. Eichler’s Tier II Canada Research Chair was renewed in 2019. In 2021, she was named one of the Top Canadian Women in Defence. She was nominated by MSVU for a SSHRC Insight Award in both 2021 and 2022.