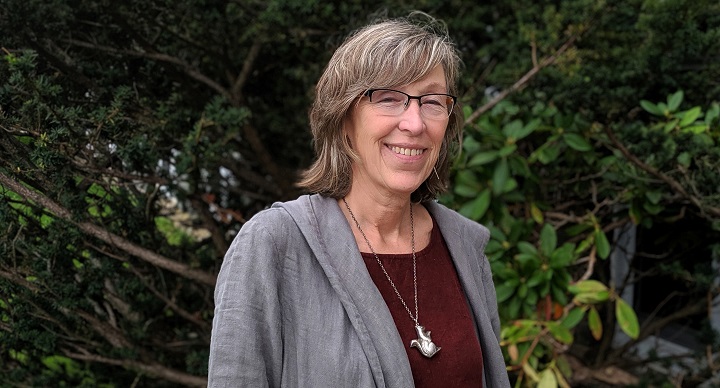 Kelly O’Neil is a researcher, writer, advocate and artist. And she’s blended these skills beautifully in one stand-out graduate thesis.

As a woman in her late 50s, Kelly experienced living with a low income and recognized how older women may be marginalized in policy and public discourse about issues affecting them. Her thesis explores the experience of housing insecurity for older women in HRM living with a low income. And it does so with tremendous artistic flair and impact.
Kelly created an evocative snapshot of her 2019 thesis titled Older Women and Housing Insecurity in Halifax Regional Municipality as an infographic instead of the standard summary (you can check out a handwritten/cursive version here and a version in typeface here). 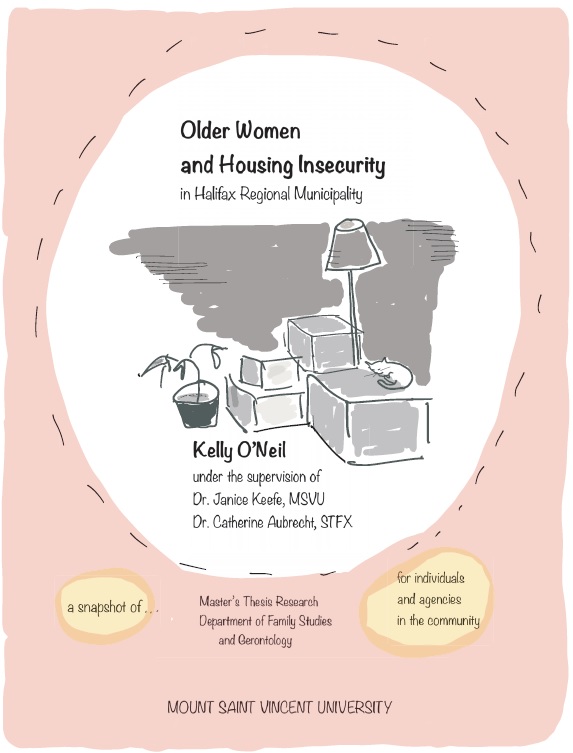 Using hand drawn illustrations, for example her own sketched compositions of the women interviewed, she brought her thesis to life and gave a face to her research. She contrasted the effects of housing insecurity on health and wellness with illustrations of a peacefully sleeping cat, rain clouds and a worried piggybank. Through her illustrations, she aimed to bridge her academic work to the community in an accessible and engaging way (a key focus for Kelly) and in a way that would encourage readers to think and talk about the housing concerns of older women in HRM.
As part of her master’s degree in Family Studies and Gerontology at MSVU (completed May 2019), Kelly conducted her graduate research under the supervision of MSVU faculty member and director of the NS Centre on Aging, Dr. Janice Keefe, and Dr. Catherine Aubrecht of St. Francis Xavier University.
In recognition of this work, Kelly received the Graduate Thesis Award at MSVU’s fall convocation on November 3, 2019. The award, given once per year by the Graduate Studies Committee, recognizes a student thesis of exceptional quality including evidence of well-developed, independent research skills and contribution to the student’s academic discipline.

Giving voice to an under-represented population

As a growing segment of the population, older women’s experiences with housing have not been well represented in research to date. Wanting to know how women linked their health and wellness to their housing, Kelly interviewed 11 women about their experiences. Among the many questions she explored were “What are older low-income women’s perceptions of their experiences of insecure housing? How do they understand the relationship between their housing and their health?”
The information she gathered showed that the women had many of the same experiences and expressed that their current situations could always be worse or that they had it better than others. With affordable housing a critical issue in Halifax and beyond, Kelly’s research comes at an important time and features a growing and underrepresented segment of the population.

Perhaps one of the biggest headlines in her visual thesis comes when Kelly challenges readers to consider “Now what?” Through illustrations and a brief supporting narrative, Kelly highlights eight things we could be doing differently based on her research findings. Among her recommendations are:
• bringing older women to program and policy discussions,
• supporting their meaningful attachment to community,
• providing adequate income supports,
• getting the word out about homeowner supports,
• being open to the possibility that older women may under-report their challenges,
• being proactive in promoting pet ownership,
• applying a trauma-informed lens when supporting older women, and
• providing age-appropriate smoking cessation supports. 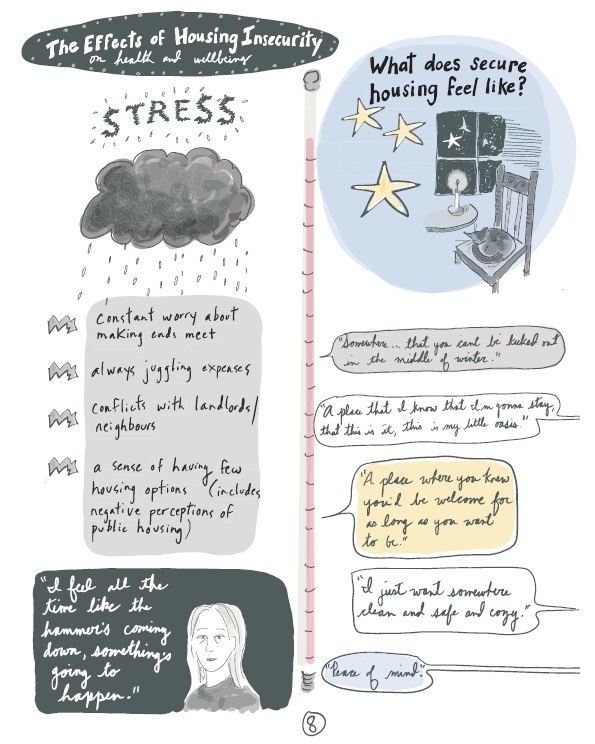 After obtaining a Bachelor of Social Work degree, Kelly became involved in a variety of non-profit community work with homeless, marginally housed and street-involved people. She highlights the vital connection between academics and the community, and the role that research can play in linking both to promote positive social change.
Kelly has recently begun the Inter-University Doctoral Program in Educational Studies (jointly delivered by MSVU, Acadia and St. FX). She realized during her graduate thesis research the need to engage the community on a deeper level, so has chosen to focus her PhD research on the engagement and empowerment of low- and modest-income older women through a Participatory Action Research project. Her aim is to develop and implement a community radio public affairs program with women aged 55+ living in HRM. It will be an opportunity for participants to explore the issues impacting them while collectively considering the value of the project process in lifelong learning and inclusive education.
Next article »
MSVU cross country running team big winners at ACAA championships
« Previous article
Fall convocation celebrates achievements of students, faculty and honorary degree recipients