A Personal Quest of Discovery 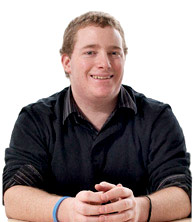 “The Mount will give you the opportunity to embrace your individuality and figure out what is best for you.”

Educate to Improve Yourself

Kyle Rogers believes that before you can determine your professional goals, you need to embrace education to help you understand who you are. Now pursuing his second degree at the Mount, Kyle is passionate about achieving his future goals through a career in community health.

Originally from the small community of Salisbury, New Brunswick, Kyle had always been interested in community health. After spending his first year taking a range of courses to help him best figure out his fit, he chose to pursue his BA in Psychology. His learnings from this degree led to his current degree, a Bachelor of Science (Science Communication).

“I’m interested in communicating about what psychologists actually do to the public,” says Kyle. “It can be challenging to communicate scientific information in an accessible way.”

The science communication program builds on the Mount’s expertise in both communications studies and science to help facilitate and encourage discussions between scientists and the general public. Kyle cites the example of the H1N1 vaccination as a case in which science needed to be made accessible to the public.

On track to graduate in the spring of 2014, Kyle is particularly enjoying his communications theory class, where he is studying the disparate beliefs of global warming and climate change between scientists and the general public. “I found it really interesting that the 2012 American presidential election was the first of several presidential elections to have no discussions surrounding global warming or climate change,” Kyle notes. “This is obviously a problem.”

Kyle feels that his out-of-classroom learning, encouraged and supported by Mount faculty, has helped to inform his future career path. In October 2011, Kyle and a Mount classmate joined a small contingent heading to Haiti where they helped to build a school. While the impact of the disaster was very much evident, Kyle was amazed at the community’s ability to persevere. “There is so much need, but they are so resilient,” he says.

“At the Mount, if you can dream it, there is no reason why it can’t happen. Everyone will come together to help you out.”

Kyle plans to pursue a graduate degree in public health where he will work to focus on health prevention measures; something that resonated with him during his time in Haiti. Looking back at his Mount experience thus far he is humbled by how much he has grown both as a scholar and a person.

He makes it clear that going to Haiti would not have been possible in his first year, mostly out of a fear of the unknown. “Coming to the Mount gave me the confidence to go through with that dream.” Work is still progressing on the Haitian school where Kyle worked. If you want to learn more, contact livedifferent.com.