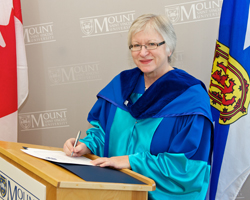 Sheila Fraser, the first woman to hold the office of Auditor General in Canada, addressed the morning ceremony graduates, “Even if your heart is set on a direction, welcome the unexpected – don’t limit yourself to opportunities that come your way. Always stand up for what you believe to be right – you may find yourself in a situation where speaking the truth leads to criticism. I urge you to muster your courage and always stay true to who you are. And finally – always remember to have fun.”

The afternoon ceremony brought colourful comedy to a formal setting as Mary Walsh grabbed the podium and exclaimed, “Now – I beg you, please remain calm. Do not be afraid.” Aside from the laughter that rang through the auditorium, 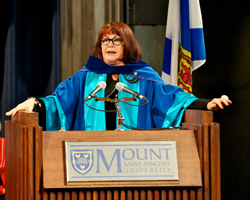 Walsh’s words gave sobering reference to issues in gender and societal gaps. “Women get a day,” she noted. “For the love of God – nuts get a whole month!” referring to April having been National Pecan Month by a US-based association.

In addition to the awarding of diplomas, certificates and degrees, a number of awards and senate medals were given out to students who graduated with distinction and the highest aggregate in their respective program.

Brianna MacDonald, a graduate of the Mount’s Bachelor of Business Administration (Honours) program from Bedford, NS, addressed the crowd as the morning ceremony valedictorian. Brianna was also awarded the President’s Prize, an award given to a graduate whose generosity, energy and commitment enriches the University. The afternoon ceremony valedictorian, also of Bedford, NS, was Erin Careless. Erin graduated with a Master of Arts in Education. 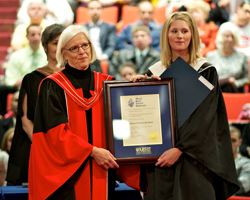 Additional prizes included membership to Kappa Gamma Pi, the National Catholic College Graduate Honor Society. The award is based on scholarship, leadership and service. Members are selected for recognition of past accompliments and in anticipation of future service. Winners included:

Next article »
Mount grad and educator on a mission to facilitate ‘aha’ moments
« Previous article
Mother of four an inspiration to fellow grads, Mount community