President Lumpkin will continue to lead the Mount until June 30, 2017. 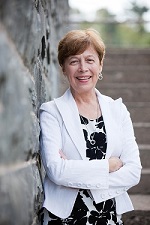 Mount Saint Vincent University (the Mount) is pleased to announce the reappointment of President and Vice-Chancellor Ramona Lumpkin for an additional two-year term ending June 30, 2017.

Ramona Lumpkin, PhD, became the Mount’s 12th President and Vice-Chancellor in 2010 for a five-year term ending June 30, 2015. She has since re-offered for an additional two-year term, a recommendation that has been received and unanimously approved by the Mount’s Board of Governors.

To date, Dr. Lumpkin has coordinated the development of the Mount’s new five-year strategic plan, Mount 2017: Making a Difference, and the execution of the university’s most ambitious capital campaign to date, Project TWENTY12, which raised over $12 million in 20 months. These funds are dedicated to the construction of the Margaret Norrie McCain Centre for Teaching, Learning and Research, a building that celebrates the role women have played in shaping our society.

As current Chair of the Association of Atlantic Universities, Dr. Lumpkin has made significant contributions to the Atlantic region, recognizing that university presidents can and should play a vital role in the overall success of our province. Dr. Lumpkin has become a valued contributor to many organizations and initiatives shaping the future of Nova Scotia, including her work as part of Premier-Designate Stephen McNeil’s transition team.