A significant fundraising campaign undertaken by Mount Saint Vincent University in honour of retiring President and Vice-Chancellor Dr. Ramona Lumpkin, CM and her husband Dr. William Blackburn, has resulted in the establishment of a new endowed scholarship supporting graduate students at the Mount. To date, more than $700,000 has been raised in support of the new scholarship. The funds were raised over the course of the past several months, with contributions from Mount faculty, staff, alumnae and community supporters. 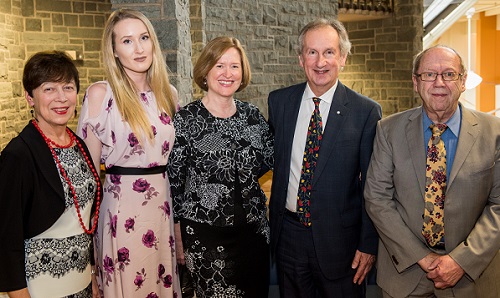 Chief among the donors are Elizabeth and Fred Fountain. Elizabeth and Fred attended the retirement celebration recently held for Ramona and came forward with their donation of $150,000 soon after. “Much earlier in the year we had already decided that we wanted to make a significant donation to the Mount as part of our personal year-long giving initiative to celebrate Canada’s 150th birthday. We decided to direct our Canada 150 donation at the Mount to the Dr. Ramona Lumpkin, CM and Dr. William H. Blackburn Graduate Studies Scholarship which celebrates Ramona and Bill’s legacy at the Mount,” said the Fountains. “Ramona’s steadfast focus has always been helping students succeed, and we’re pleased to be able to support a student-centred legacy project in her and Bill’s names.” Elizabeth and Fred were among the lead donors to the McCain Centre at the Mount (opened in 2015), and the Centre’s atrium bears their name. Catherine (Kiki) Delaney, CM (President of Delaney Capital Management Ltd., leader in the financial sector and Mount honorary degree recipient) and Nancy Ruth, CM (retired Senator, Mount honorary degree recipient and founder of the University’s Nancy’s Chair in Women’s Studies) were instrumental in kick-starting this scholarship fundraising effort, each contributing $100,000. Both Kiki and Nancy Ruth are national leaders in the advancement of women. “The scholarship in honour of Ramona and Bill will allow countless Mount graduate students access to much needed financial support,” said Catherine Woodman, Mount alumna, former Board Chair and Chair of the President Legacy Committee tasked with fundraising for this scholarship. “Because of the incredible people Ramona and Bill are and their immeasurable contributions to the Mount and our community, many people were eager to contribute to a scholarship in their names. We are so grateful for the support of the more than 200 donors who came together to honour Ramona and Bill in this special way.” Mount graduate scholarships benefit students striving to make a difference in critical fields, for example Child & Youth Study, Applied Human Nutrition, Women and Gender Studies, Family Studies & Gerontology, Education, and Communications & Public Relations – and with several of these programs only available at the Mount. Students in graduate programs are also often working and caring for families while pursuing their advanced education. The Dr. Ramona Lumpkin, CM and Dr. William H. Blackburn Graduate Studies Scholarship will significantly increase financial support available to Mount graduate students. Donations to the scholarship can still be made at msvu.ca/donate. Dr. Ramona Lumpkin, CM retires from the Mount on June 30, 2017. During her time at the Mount, Ramona has been instrumental in developing and executing the University’s current strategic plan and leading the largest fundraising campaign in the University’s history, the latter resulting in the opening of the first building on a Canadian university campus dedicated to the accomplishments of women: the Margaret Norrie McCain Centre for Teaching Learning and Research. Dr. Mary Bluechardt has been named the University’s 13th President and Vice-Chancellor. She starts in the role on July 1, 2017.