Did you know that February is psychology month?

Did you know that at Mount Saint Vincent University we are fortunate to have an excellent psychology department?

To celebrate psychology month, we’re highlighting some of our amazing psychology professors and the interesting research they’re leading.

Dr. Derek Fisher is an associate professor at MSVU and the psychology department chair. He will undoubtedly be a familiar face to many, based on his role in the “Psychology Quips” series with fellow psychology professor Dr. Will Shead. The social-media based series explains psychological concepts in a way that’s easy to understand and humorous. If you haven’t seen it yet, you really should check it out. 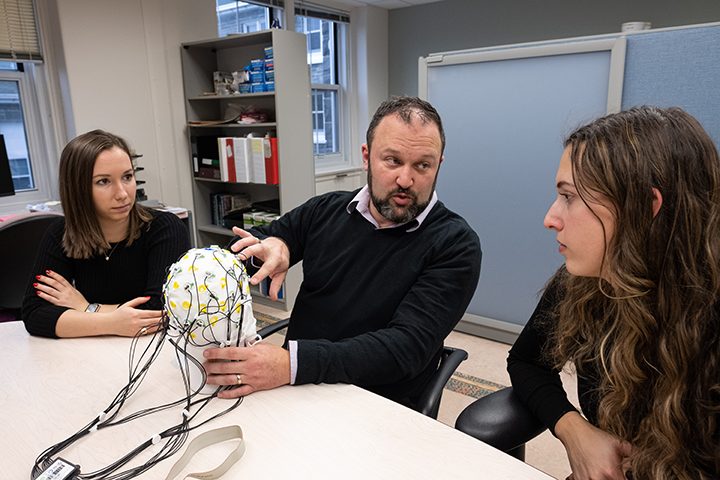 Growing up, Derek wanted to be a marine biologist, but he eventually concluded that his tendency to get sea sick would be too much of an obstacle. Throughout the first three years of his undergraduate degree, he planned to go into medicine and become a cardiologist. However, while working on his honours thesis in his final undergraduate year, the EEG-based research on nicotine he was working on sparked his interest in the field and ultimately led him to his current career.

Today, Derek’s research focuses on psychopharmacology (how drugs like caffeine, cannabis and nicotine affect the brain) and clinical neuroscience. Currently, he is researching the effects of cannabis on brain function. Specifically, he is “looking at how cannabis alters inhibitory function (the ability to suppress unwanted/unnecessary responses). We’re also looking at a measure called auditory change detection, which is a marker of overall auditory cortex function, and a known deficit in schizophrenia, which has been linked to cannabis use in adolescence.” 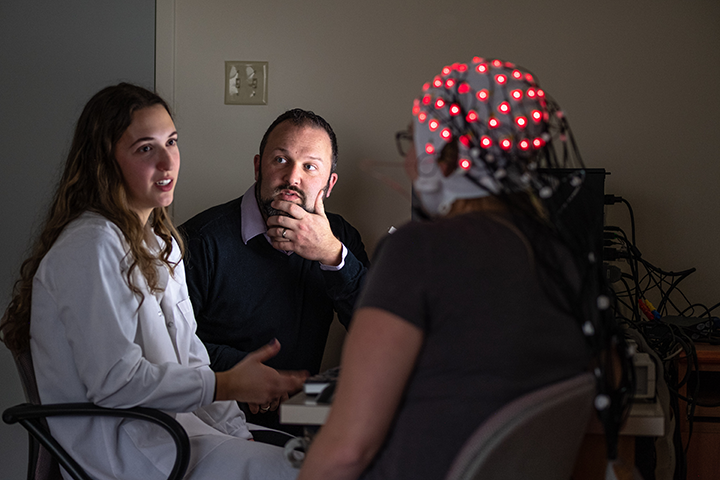 He is also collaborating with Dr. Tara Perrot of the Psychology and Neuroscience department at Dalhousie University to research the effects of caffeine on brain function during various stages of the menstrual cycle. So far, he has found that when estradiol and progesterone levels are high, the effect of caffeine is heightened. He hopes that this research will help bring more equity to the psychopharmacology field as a specific focus on women has not often been part of the research.

Another facet of Derek’s research involves the study of how psychiatric disorders, in particular schizophrenia, affect brain function. Together with Dr. Phil Tibbo of Dalhousie, he is currently investigating potential brain-based biomarkers related to the risk of developing schizophrenia. The goal is to be able to better predict risk for developing schizophrenia toward more efficient treatment and resourcing.

In 2018, he was named the recipient of the Presidential Service Award of the EEG and Clinical Neuroscience Society (ECNS). In 2015, while at a conference in Munich, he was presented with the Young Investigator Award by ECNS.

Derek’s work has been funded by various agencies, including the Canadian Institutes for Health Research, the Natural Sciences and Engineering Research Council of Canada, and Research Nova Scotia.