Congratulations to the Mount Mystics women’s volleyball team on their win against the Holland College Hurricanes to capture the Atlantic Collegiate Athletic Association (or ACAA) championship title on Sunday, March 1. The Mount gym was packed this past weekend as the University played host to this year’s ACAA volleyball championships. 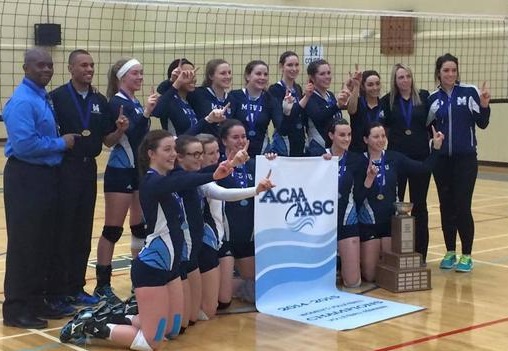 Congratulations to all members of the Mount Mystics Women’s Volleyball championship team!

March 3, 2015 – Cégep Édouard-Montpetit is set to host the event March 11-14 in Longueuil, QC. All matches will be webcast on CCAA.tv. For the complete schedule, latest results, news and photos, visit the tournament’s official website. Updates will also be available on Twitter, Facebook and Flickr. The Championship Awards Banquet will be held on Wednesday, March 11 at the Sandman Hotel, where the CCAA Player of the Year, Coach of the Year and All-Canadians will be honoured.