In 2013, the staff and students at Abraham Beardy Memorial School in northern Manitoba’s Shamattawa First Nation lost all of their books and had their library condemned due to mould. With a new school slated to open in September of 2015, the community of Shamattawa hopes that, for the first time, they will be able to offer their 300+ students a complete education to grade 12, including a brand new library to support them—but they need new books in order to do so.
Mount students are well-known for their globally-minded and socially responsible philosophy, and so it might come as no surprise that one of the University’s very own has stepped up to help rebuild the library collection at Abraham Beardy Memorial School.

Stacey de Molitor is a fourth-year Bachelor of Arts student at the Mount who was struck by this situation and sought to be part of the solution. She has single-handedly organized a book drive known as “Bound For Shamattawa” to gather new and gently-used books for students in grades kindergarten to 12 within the Shamattawa community. 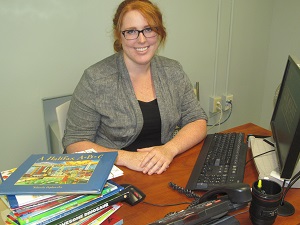 “It didn’t seem right that these students were without such basic tools for learning, and yet I knew I had extra books collecting dust on my shelves. Having been at the Mount for over three years now, I knew that if this project was something I wanted to do, this was the place to do it,” Stacey smiles. “I went to our president, Dr. Ramona Lumpkin, with the idea first, and she, along with others, helped me find the people and support I needed to get the project off the ground.”

In one of his first messages back to Stacey, school principal Lawrence Einarrson said, “Abraham Beardy Memorial School is more than excited that you’re taking an interest in our need, and we welcome your organization with open arms.”

“At first I saw the book drive as an opportunity to bring Mount students together in a common cause,” said Stacey. “Though we all study different subjects and disciplines, we all have at least one thing in common, and that’s books.”
But Stacey sees much greater potential in the book drive now: an opportunity for communities to come together in support of the gift of literacy.
“Even though communities are intangible, the Mount’s is one you can definitely see and feel. Having made such an impact on my own life, I know that our community can make a great deal of difference to the students in Shamattawa, and it is my hope that everyone and anyone will feel encouraged to participate in this project.”
Stacey’s efforts are being supported in the community as well, with Video Difference owner Tom Michaels volunteering his Halifax store locations and video drop-boxes as donation points for anyone who wants to donate books to “Bound for Shamattawa”.
Books can also be dropped off at the Mount Library or Students’ Union office in the Rosaria Student Centre. “We have a residence room on campus that we are using for storage, and it is our hope to be able to fill it, floor to ceiling, with books,” said Stacey.
Bound For Shamattawa will be collecting books until the end of January 2015, when Stacey says she plans to host a packing-party on Caritas Day – a day that the Mount sets aside each year to give back and celebrate the importance of charity and volunteering.
Stacey is still in need of a shipping partner to get the books to Shamattawa and is also simultaneously raising funds for the purchase of additional books and resources that the Abraham Beardy Memorial School library may need. Those funds will support shipping as well, if required.

“I hope that people will connect with this project – find us on Facebook and Twitter – and show their support in whatever way they can,” says Stacey. “It is not often that we have the opportunity to connect with another culture and community over education and literacy in this way, and I think this is one of those projects that we could all gain a great deal from.” 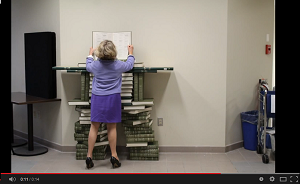 Stacey, along with staff and students, created a life-size book inukshuk at the Mount Library.

You can drop off your book donations any time between now and January 2015!

Learn more about the book drive